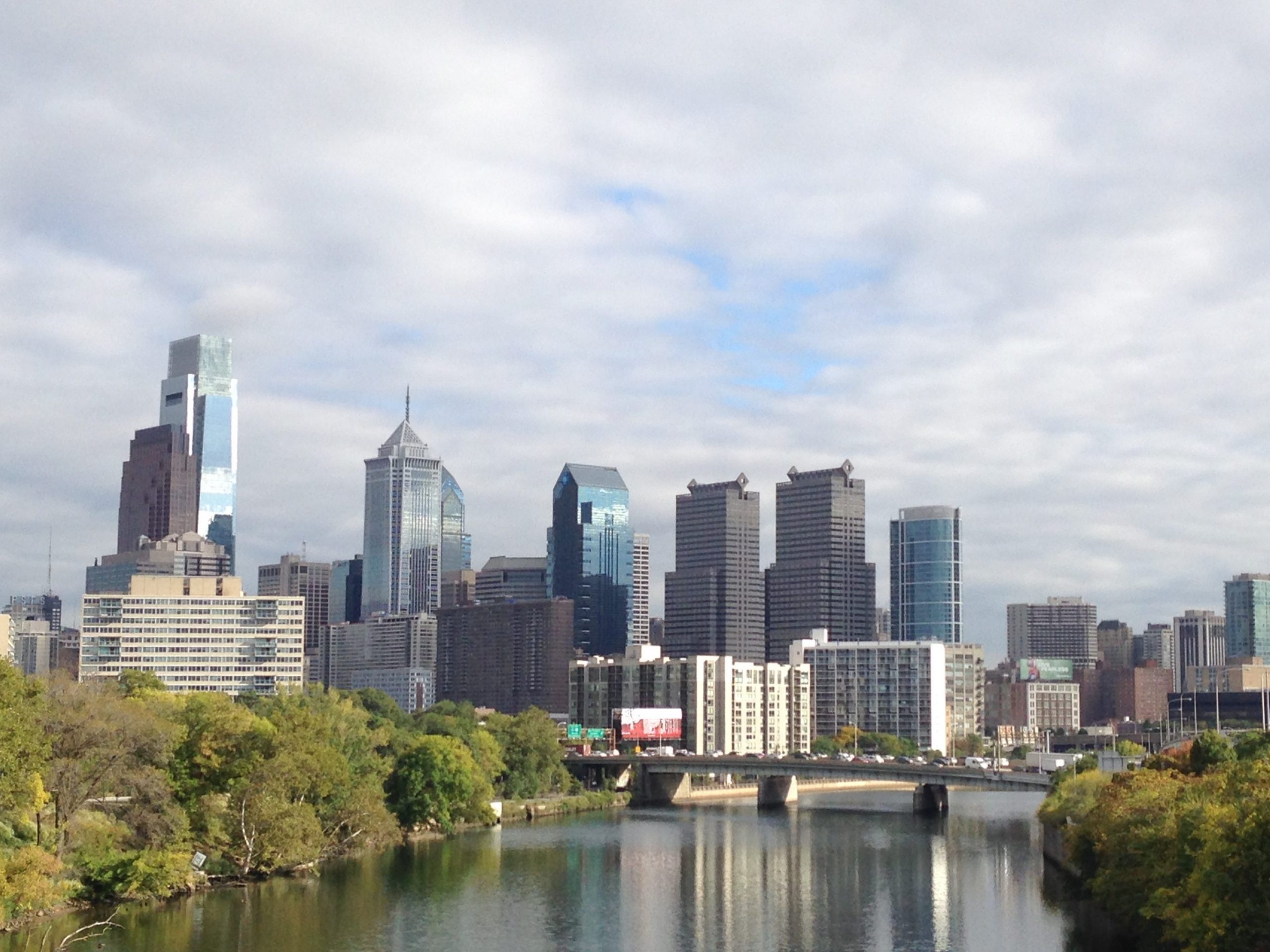 For our last Pennsylvania destination, we visited Philadelphia, known as the “birthplace of American democracy” and “The City of Brotherly Love.” Wondering how Philadelphia received the “brotherly love” nickname, I discovered that it’s not so much a nickname as it’s actually a literal translation. Philadelphia in Greek basically means “brother” and “love,” hence the name “The City of Brotherly Love.” Aren’t little random facts fun? Enough with the linguistics lesson though.

We were dying to have a Philly Cheesesteak in Philadelphia, but first things first. With only one day to see all the historical sites in Philadelphia, we had to make the most of our visit by having a strategic plan (these websites were helpful for planning our trip to Philadelphia: www.nps.gov & www.visitphilly.com).  Initially concerned about parking our truck in Philadelphia while sightseeing, we were relieved to find that there was ample (affordable) all-day underground parking at the Independence Visitor Center. This was the perfect starting point for the Independence National Historical Park, known as America’s Most Historic Square Mile.

From the visitor center, we walked across the street to the location of the Liberty Bell. But, unfortunately, the line to enter the Liberty Bell Center was ridiculously long. Since we were anxious to see a number of famous places in Philly, we decided to return to the Liberty Bell later. We kept walking and crossed another street to Independence Hall. Free tours are given of the significant building where both the Declaration of Independence and United States Constitution were written and signed. Travel Tip: between March and December, you must get advance tour tickets for Independence Hall, which you can pick up at the Ranger’s Desk in the Independence Visitor Center.

After our guided tour of Independence Hall, we entered the West Wing where we saw a draft of the Declaration of Independence written by Thomas Jefferson (sadly, no photos were allowed). There were also surviving copies of the Articles of Confederation and the United States Constitution. Seeing the aged documents handwritten centuries ago by the Founding Fathers of the USA was a privilege.

We then visited Congress Hall where both George Washington and John Adams were inaugurated President.  From 1790 to 1800, Philadelphia was temporarily the capital of the United States.  During this time, Congress Hall served as the seat of the United States Congress.  This is also the building where the first U.S. Senate and the first U.S. House of Representatives sat.

Next we headed back to the Liberty Bell Center. Luckily, the line was much shorter this time around. Before we knew it, we were standing next to the Liberty Bell, one of the most iconic historic items not only in Philadelphia but in the entire country as well. Being so close to such an important piece of history was surreal. We were able to walk completely around the Liberty Bell and get pretty close to it, giving us a good view of all sides of the bell and its famous crack.

For lunch, it was finally time to begin our hunt for the best Philly Cheesesteak in town. We settled on Sonny’s and each ordered a cheesesteak the original way – with Cheez Whiz! That was an interesting discovery. We never knew authentic Philly Cheesesteaks were made with Cheez Whiz. In the past, we had always had them with provolone and peppers and were skeptical about having jarred cheese-like spread instead. But since we were in Philly, we had to have our cheesesteaks the official Philly way and so, Cheez Whiz it was.

As soon as we had our first cheesy bite, all doubts had vanished and we were hooked! Outstanding! The soft crusty hoagie roll with savory, tender strips of beef and gooey cheese sauce is practically an out-of-body experience, one that will not be forgotten. Like eating a Chicago deep-dish pizza while in Chicago, having a Philly Cheesesteak in Philadelphia can’t be beat!

Once we had scarfed down our scrumptious cheesesteaks and licked every remaining bit of Cheez Whiz from our fingers, we continued our walking excursion. Next up was Christ Church, referred to as “The Nation’s Church” due to many of the church’s members being leaders of the Revolutionary War, such as George Washington and Benjamin Franklin. We also wanted to visit the church’s burial ground because Benjamin Franklin is buried there. However, we quickly learned that the burial ground is actually located several blocks away from the church.

On the way there, we came across Elfreth’s Alley, the oldest continually inhabited street in the United States. While walking down the narrow street and looking at the centuries-old row houses, it felt as if we had stepped back in time. With the oldest home built in 1702, it’s hard to believe that people still live in the original brick houses in this charmingly patriotic alleyway. Almost to the burial ground, we took a brief look at the Betsy Ross House and saw Betsy Ross’s gravesite in the garden courtyard.

After another short walk, we finally made it to the Christ Church Burial Ground. There we saw the graves of Benjamin Franklin and four other signers of the Declaration of Independence. You hear about important historical figures, but seeing their final resting place somehow gives even more meaning to their lives. The gravesites are proof that they really existed, making them feel like a real person rather than a fictional character you learned about in school. In an extremely ironic way, seeing where these famous people are buried almost brings them to life, if that makes any sense (excuse the poor expression).

From the burial ground, we visited the Federal Reserve Bank of Philadelphia to view the free Money in Motion Exhibit. After being required to walk through a metal detector, we were able to see an actual $100,000 bill as well as a cart filled with $1,350,000 in $5 bills! There were also other forms of our national currency dating all the way back to the 1600s, including currency from the original 13 colonies! Tragically we weren’t allowed to take any photos of the cash, but trust me, it was impressive! And as a parting gift, we were given a free souvenir bag of shredded dollar bills. Thanks, Philadelphia! 🙂

Lastly, we went to the Declaration (Graff) House, the recreated home where Thomas Jefferson wrote the Declaration of Independence in 1776. We had hoped to tour the inside of the house, but it was closed. Now that we had seen everything we had wanted to in the Independence National Historical Park, we drove around downtown Philadelphia where we saw the pink fountain at JFK Plaza (also known as “Love Park”). We also passed the famous steps of the Philadelphia Museum of Art, which Rocky ran up in the movie “Rocky.”

Before leaving Philadelphia, we stopped at the Eastern State Penitentiary, a National Historic Landmark. Opened in 1829, not only was this America’s first penitentiary, it is also considered to be the world’s first true penitentiary. Once the largest and most expensive public structure ever constructed, the crumbling building now sits in ruin. We arrived at the old penitentiary about 30 minutes before they were closing. Even though we knew we probably wouldn’t be able to see everything within half an hour, we still wanted to tour the penitentiary, as this would be our only opportunity to do so.

Luckily, it was a self-guided tour, so we could take as much (or as little) time as we wanted in each area. While we weren’t able to listen to the entire audio tour, we still had enough time to view plenty of the eerie, decrepit building. I have a strange fascination with abandoned places and could have spent the entire day photographing every nook and cranny. I’m just glad we had time to see the interior of the world’s first penitentiary!