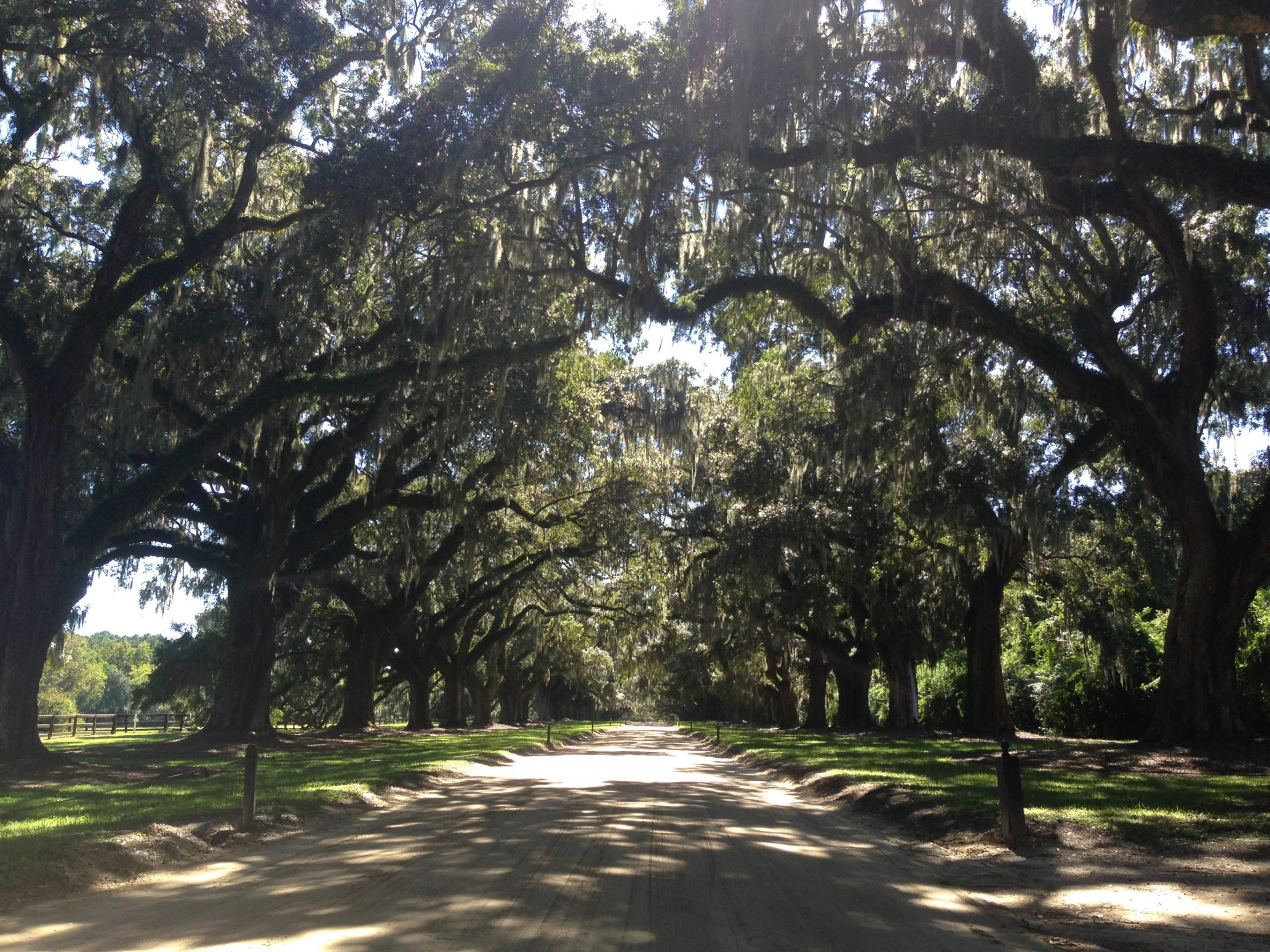 The Avenue of the Oaks

After driving through the Historic Ashley River Plantation District yesterday, we were looking forward to touring one of the many plantations in the Charleston area. Out of all the available options, we decided to see Boone Hall Plantation in Mount Pleasant just outside of downtown Charleston. There were several reasons why we chose Boone Hall. First of all, it’s one of the oldest working plantations in the country. Founded in 1681, the plantation has been producing crops for over three hundred years. But, the main reason was the road leading up to the plantation called “The Avenue of the Oaks.” Like Cypress Gardens, this location was also featured in the movie “The Notebook.”

We were completely enthralled with the enchanting Southern live oak trees for which “The Avenue of the Oaks” derives its name. The massive oak trees line the road with their branches spanning the width, reaching for their siblings across the way. Spanish moss cloaks them and drips from their arms, creating a shady sanctuary. As we drove towards the plantation house, it was as if a theater curtain was being raised, slowly revealing the mansion. The trees were planted in 1743 and took two centuries to grow large enough for their branches to meet above the road. This magical grand entrance was by far the best element of Boone Hall Plantation.

We also toured the plantation’s mansion, which is actually the fourth house that has been built on the land. The roughly 10,000 square foot dwelling consists of 22 rooms, including 8 bedrooms and 6 bathrooms. However, we were only able to view a few rooms on the first floor since the family that owns the plantation lives on the top two floors.  Photos were not allowed to be taken inside the house.  A fun fact we learned on the tour was that the plantation was sold in 1935 for $60,000, the same value as the piano currently sitting in the library.

Next, we explored the gardens and grounds of the plantation. The slave quarters were interesting as they provided details regarding the history of slavery along with the emancipation and rights for African-Americans. Justin also enjoyed “Exploring the Gullah Culture,” a live presentation about the Southern culture of enslaved Africans and their descendants.

On our way out, we entered the Butterfly Pavilion, an enclosed garden with hundreds of butterflies. The butterflies were not shy as they lounged on flowers and slowly opened their wings to proudly display their vibrant colors. In fact, it was as if the butterflies were modeling and posing for photos! This was a lovely conclusion to our time at Boone Hall Plantation.

Once we were done touring the plantation, we headed about 5 miles southeast to the barrier island of Isle of Palms. We took advantage of the ample public parking and walked out to the beach where people were enjoying the sunny weather. From there, we continued driving south along Ocean Blvd. As we glanced at the colorful beachfront homes, we saw a large pink house surrounded by matching pink flamingos. Hold up! Pink is my all-time favorite color, and I kind of (ok…that may be a slight understatement) have a thing for flamingos. We had to stop the truck, so I could get out and take a photo with my dream house! Haha!

Just a few minutes south of Isles of Palms, we reached Sullivan’s Island. With a younger, lively crowd and the most dining options, this was our favorite island in the Charleston area. There was also a lighthouse, a rather industrial looking lighthouse, but a lighthouse nonetheless. Also, with its close proximity to Mount Pleasant, Sullivan’s Island would be our Charleston beach town of choice.

Since we were so close to Mount Pleasant, this was an opportune time to investigate the lovely suburban town that sparked out interest as we first approached Charleston. While there are no mountains or even hills in Mount Pleasant, it truly is quite a pleasant place. There are nice neighborhoods, including all the well-maintained older homes in the Old Village Historic District. And with numerous restaurants and other commerce nearby, Mount Pleasant is where we’d want to live if we decide to move to Charleston.