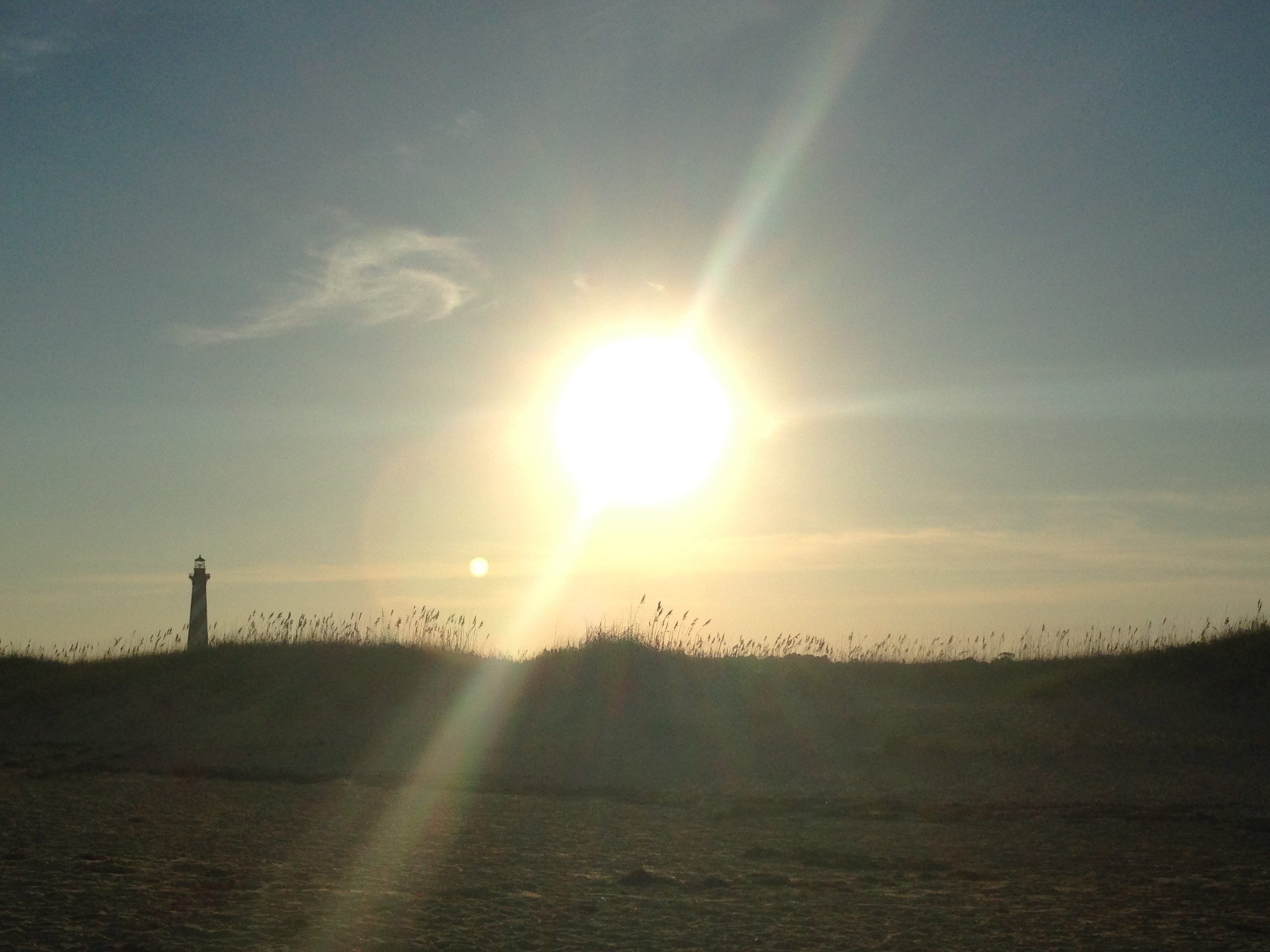 Originally we were planning on heading south from Raleigh, NC, down to Myrtle Beach, SC. But, we’ve learned on this trip that plans change frequently. Based on suggestions from several different people, we decided to take a slight detour back up north and further east to the Outer Banks (also referred to as simply “OBX”) of North Carolina. The Outer Banks are a narrow strip of barrier islands stretching 200-miles long from the southeastern corner of Virginia along the coast of North Carolina.

While we were driving, we saw several cotton fields along with a few rivers. I was shocked when I learned that one of the rivers was named the Alligator River. The body of water was so incredibly wide, I thought it must’ve been a lake. But no, the name clearly states river. We also drove over three long bridges, each several miles long and ridiculously bumpy. Driving over the bridges felt like we were riding a bucking bull! We’ve learned that towing a travel trailer does not make for a smooth ride.

Between two of the bridges was Roanoke Island, home of the infamous Lost Colony as well as America’s first English born child. With the entire colony vanishing in 1587, Roanoke has always intrigued me. You might remember from our time spent at the Eastern State Penitentiary that I’m slightly obsessed with abandoned places. They fascinate me, and the story of the Lost Colony from Roanoke is one I’ve always been curious about. When we reached the Outer Banks, we also reached the end of the road. We turned left and drove roughly 11 miles north to our campground in Kill Devil’s Hill, NC. Once we had finished getting settled in at our camp, we headed back south down the narrow strip of land nearly 59 miles to the Cape Hatteras Lighthouse at the Cape Hatteras National Seashore. We assumed that, while driving, we would have an ocean view the entire way. There were a few times when we were treated to glimpses of the ocean. But, we were disappointed that sand dunes mostly blocked our sightlines of the water. We were also disappointed that there were no cute seaside villages like we had hoped to see.

I hate to admit this, but if I’m being honest, we weren’t impressed with the Outer Banks. Before arriving, we had envisioned quaint beach towns, but that wasn’t the case at all. The Outer Banks felt Spring Break-ish and only featured a few restaurants and gift shops. I could picture it as a great summer destination for families to spend on the beach.

But other than that, there didn’t seem to be much to do or see. The island is actually a sand bar with most of the land completely undeveloped except for a few small towns. The majority of the houses were tall and had an average of 4 stories with decks on each level. They were also built up on stilts for potential flood protection. Apparently hurricanes are a major concern in the area.

After traveling through the small towns of Rodanthe and Avon, we reached the Cape Hatteras Light, the tallest brick lighthouse in America with a height of 210 feet at its new site. For $8, you can climb to the top of the lighthouse. There are a total of 257 steps to take, which is equivalent to climbing up a 12 stories! By the time we got there, though, it was already closed for the day. My back and I were actually relieved to not be able to climb to the top of the lighthouse! Haha! And, luckily, we were still able to see the lighthouse and talk to a Park Ranger about it. An interesting fact we learned from the Ranger was that, in 1999, the 4,830 ton (9.66 million pound) lighthouse was actually moved 2,900 feet over a period of 23 days! With the daylight dwindling, we traveled up the road to a nearby beach where we were provided with a view of the lighthouse from a distance. As we eventually made our way back north towards our campground, we were compelled to pull over at one point. This allowed us to take a moment and fully appreciate the sun setting over the water on the sound side of the island. Sunsets must be one of the features people enjoy about the Outer Banks!

For our last day in the Outer Banks, we visited the Wright Brothers National Memorial, which happened to be right down the road from where we were staying. This is the location where the first powered flight took place! After paying an admission fee of $4 per person, we parked and entered the Visitor Center, which houses a museum about the Wright Brothers and their achievements in flight.

Outside of the Visitor Center are a couple of exhibits, including replicas of two wooden sheds that represent the world’s first airplane hangar as well as the living quarters for the Wright brothers. There are also markers, which show the take-off and landing points for the first four successful flights made by the brothers on December 17th, 1903. And, sitting atop Kill Devil Hill is the memorial tower, a 60-foot tall stone monument, honoring the accomplishments of the Wright brothers.

We didn’t spend too much time at the outdoor sites as it was a hot and humid day. Later in the evening, we had dinner at The Colington Cafe located in-between the memorial and our campground. With all the fast-food meals we had been eating lately, it was time for us to treat ourselves to some surf and turf ! The restaurant was actually a quaint house with a mix of country and Victorian charm. This was quite different from all the other establishments we had seen in the Outer Banks. It began raining, and we enjoyed our meals while we looked outside at the rain showering the restaurant’s garden. We found the charm we had been hoping for and had a lovely end to our time in the OBX.

Back to our original route. We left the Outer Banks this morning, drove back through Raleigh and headed south to Myrtle Beach. We passed numerous cotton fields and several rivers, including the Tar River and the Cape Fear River outside of Wilmington, NC. The driving directions eventually took us through took some back roads, and we prayed not to break down for fear of having a Texas Chainsaw Massacre experience. Fortunately, we avoided any issues and subsequent involvement in a horror story.

As we pulled into Myrtle Beach, SC, we were reminded of Pigeon Forge, TN. We had a case of déjà vu when we saw another upside down building, Planet Hollywood, Hard Rock, and more dinner show billboards, go kart tracks, and miniature golf courses. This was not what we were expecting, but it should be interesting!