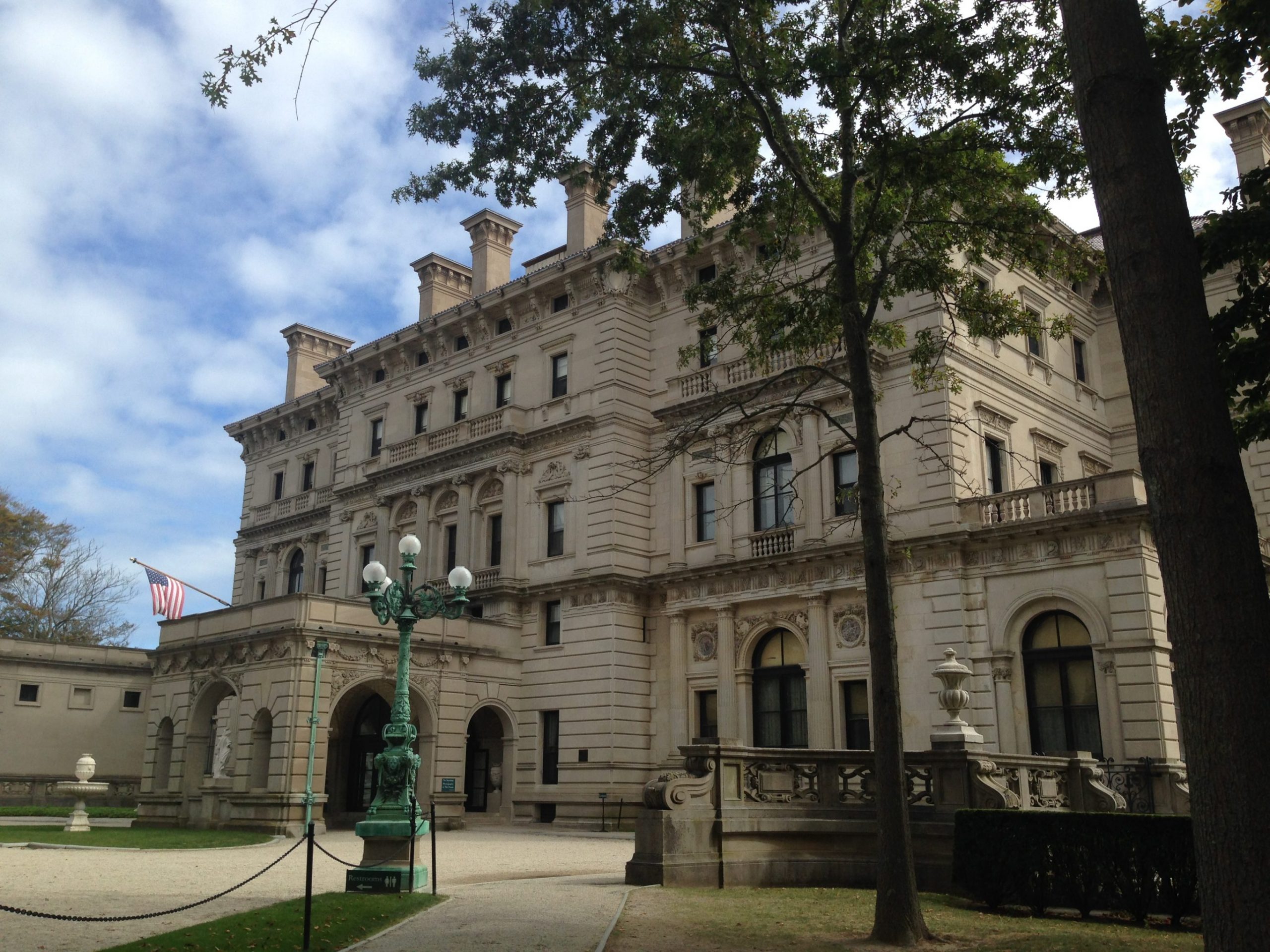 Justin and I had a fight last night, and I’m not ashamed to admit that it wasn’t our first fight on this road trip (nor was it our last). When you spend literally all day every day together for weeks and months on end, you tend to need some space. So we took a break from each other today and went our separate ways. Justin went back to Boston to finish the Freedom Trail while I spent the day with my mom and stepdad in Newport, RI. Here are Justin’s photos from his extra time in Boston . . .

I had been to Newport with my mom when I visited her before and really enjoyed it. We decided to go back to tour The Breakers, a Vanderbilt mansion and one of the many estates Newport is famous for. While the house is expansive, the exterior is rather plain compared to the fancy facade I was expecting. However, as soon as we entered the residence, I knew why The Breakers is considered to be the grandest of the Newport mansions. Tragically no photos are allowed to be taken inside, but believe me when I say that the interior is pure opulence.

My favorite part of the mansion was the Billiards Room with its ornate mosaics formed by semi-precious stones. There were even platinum-covered walls in the Morning Room – yes, platinum walls! And The Breakers was just the Vanderbilt’s summer home, not even their main house. When you have enough money to cover the walls of your summer getaway in a precious metal like platinum, you know you’ve done okay. Haha!

Driving through Newport, I noticed that the streets were really narrow, and the drivers were rude as we tried to get through. I was glad I wasn’t the one navigating the tight roadways as we made our way to the Hotel Viking to have afternoon tea. My mom introduced my sister and I to tea parties when we were little girls. Ever since then I’ve loved tea and any chance to have some. Tea has become a special tradition for us, and every time we’ve had tea together has been a memorable occasion. Tea time is a leisurely indulgence and something I believe everybody should experience at least once in their lives. Everyone can enjoy having afternoon tea, even men. My mom converted my stepdad, and I’ve won Justin over to the tea side. While seemingly dainty and feminine, they can’t deny the deliciousness of tea and its accompanying edible delights. Plus, Justin has a massive sweet tooth and loves all the dessert items involved with the tradition of tea. Too bad he missed out on tea today!

The afternoon tea at the Hotel Viking included each person’s tea flavor of choice along with an assortment of petite tea sandwiches, pastries, scones and chocolate truffles. After we started sipping our tea, all of the food items were brought out on a three-tiered platter. When the food first arrives, you think, “Is that it?” Everything is practically bite-size and doesn’t seem like it would be enough for a filling meal. But between all the cups of tea and the variety of finger foods, you’ll be full before you know what hit you. That’s one of the reasons why it’s nice to relax, take your time and savor every sip and bite.

After having our fill of tea and delectable treats, we took a short stroll along the Cliff Walk. The partially paved walkway borders the Atlantic Ocean behind several of the mansions and offers scenic views of the rocky New England coastline. We then took a lovely drive on Ocean Avenue where we caught more glimpses of the ocean as we headed out of Newport. On our way back to Massachusetts, we stopped in Providence for dinner.

We ate at Mediterraneo in Federal Hill, the Little Italy of Providence. The food was good, and the service was excellent . . . up until the end, that is. When we were finished with our meals, we had to wait half an hour just to get the check and then another 15 minutes to pay! Supposedly the credit card machine was down, so they gave us free shots of lemon liqueur to apologize. All was forgiven. Cheers! 😉

This website uses cookies to improve your experience while you navigate through the website. Out of these cookies, the cookies that are categorized as necessary are stored on your browser as they are essential for the working of basic functionalities of the website. We also use third-party cookies that help us analyze and understand how you use this website. These cookies will be stored in your browser only with your consent. You also have the option to opt-out of these cookies. But opting out of some of these cookies may have an effect on your browsing experience.
Necessary Always Enabled
Necessary cookies are absolutely essential for the website to function properly. This category only includes cookies that ensures basic functionalities and security features of the website. These cookies do not store any personal information.
Non-necessary
Any cookies that may not be particularly necessary for the website to function and is used specifically to collect user personal data via analytics, ads, other embedded contents are termed as non-necessary cookies. It is mandatory to procure user consent prior to running these cookies on your website.
SAVE & ACCEPT