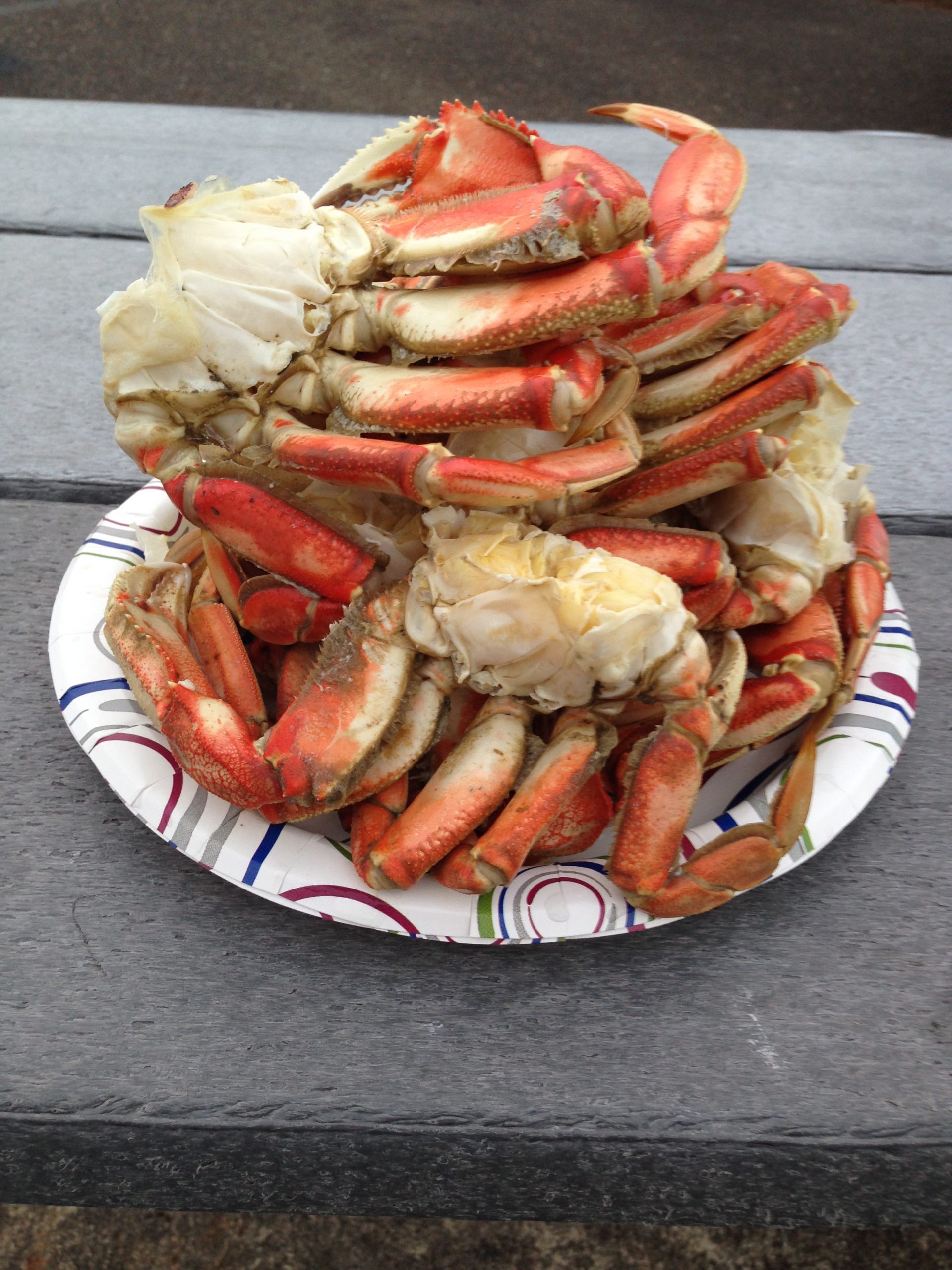 Perhaps it’s the proximity of the ocean, but we’ve been in lazy mode ever since we arrived on the Oregon coast. Plus, everyone has been super friendly in the small towns surrounding the bay, which may have also contributed to us not wanting to venture too far from our base camp.

We traveled to the nearby dock to try our luck at crabbing again. Rather than using chicken as bait this time, we decided to try fish (salmon specifically) thinking maybe fish would lure more crabs. Chicken just seemed odd for catching crabs. Big mistake though with using fish as bait! It turns out that that in addition to crabs liking fish, seals also love it and will steal it from the crab traps! Several times we pulled our traps up from the water to find them completely empty with the fish bait missing!

Despite the fish thieves (AKA seals) though, we caught quite a few more crabs this time around. However, we still turned up empty-handed as far as keepers for the second day in a row! Most of the crabs were too small as they were less than 5.75” across. Any of the ones we caught that met the size requirement happened to be females and had to be thrown back in as well. It’s frustrating as you pull your trap up and see a big crab in the net only to find out that you can’t keep it because it’s not a male.  🙁 Even though we didn’t catch any keepers, we still enjoyed crabbing. We weren’t the only ones out crabbing on the dock. Look at all those lines for crab traps!

Crabbing is addicting. We went back to the dock for the 3rd day in a row, and the 3rd time really was a charm! It might have also helped that we used 2 traps this time instead of just 1, and we went back to using chicken to avoid having the seals steal our bait (they don’t like chicken come to find out).

The very first crab we caught ended up being a keeper! After that though, the next few hours didn’t produce any crabs that we could keep. The few crabs we did catch were all females and/or too small. We stuck it out though, and it paid off! We finally caught a few more large male crabs! In total, we caught 4 Dungeness crab keepers in 5.5 hours! Persistence pays! 🙂

What were we supposed to do with 4 crabs though? Realization hit. Having 4 crabs meant that we’d have to actually cook and clean them. Uhhh…Neither of us had ever cooked and cleaned crabs before. We usually like to eat our crabs pre-cooked in a restaurant setting (preferably…haha!). But there’s a first time for everything. Plus, how rewarding would it be to make a seafood meal out of fresh crabs that we had caught ourselves?

We found out from other crabbers that it’s best to keep the crabs in ocean salt water (the same water you caught them in) to keep them alive.  Supposedly if you put them in regular water, they’ll emit a poison and be inedible.  I read a crab-cooking tutorial online and was determined to figure it out even as intimidating as it was. Luckily though, some of our campground neighbors ended up helping us when they found out we had never done it before.

When they asked me how I planned on cooking the crabs, I said that I had a 12-quart pot and figured I could cook 2 at a time. They shook their heads and handed me a massive pot that must have been at least 24 quarts. They said to use their pot along with their portable burner attached to a propane tank for boiling the water.

After waiting for the water to boil, I used tongs to put the live crabs into the boiling water. Once the water returned to a rolling boil, I let the crabs cook for 20 minutes then pulled them out of the water and allowed them to cool for a few minutes. I learned that there are a couple ways to tell when a crab is done cooking: 1) they’ll float to the surface of the boiling water, and 2) the color of their shell will change from a brownish/purplish-grey to a bright reddish-orange.

Once the crabs were cool enough to handle, our neighbors helped us clean them, which requires pulling them apart and rinsing all the gooey insides out. To be honest, it wasn’t pleasant, but it also wasn’t as hard and/or disgusting as I thought it would be. Thank goodness for our RV neighbors though! The 2 couples, Greg & Teresa and Meno & Michelle, saved us! Without their help, it probably would’ve taken us all night to cook them in our inadequate pot and try to figure out how to clean them.

When we returned our new friends’ equipment, they invited us to have some wine with them. We ended up talking and laughing for hours! Some of the best and most enjoyable moments on this trip have been meeting new people who will hopefully become lifelong friends. We’ve been extremely fortunate to have met such wonderful people who have helped us tremendously one way or another. Their kindness will not be forgotten.