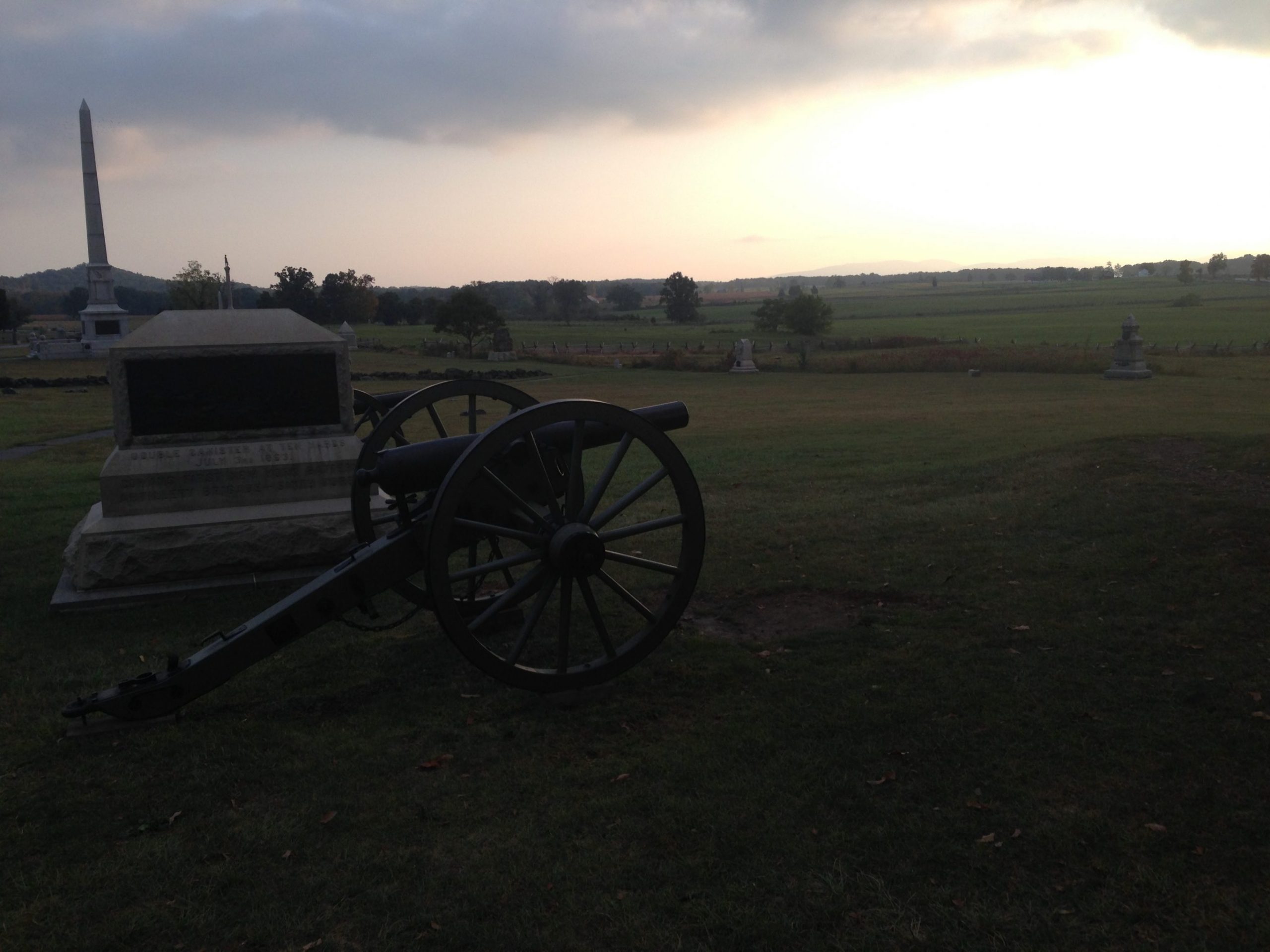 Today marks the 4th month of our journey! While in Pennsylvania, we have several different places we want to see. Yesterday was Hershey, today is Gettysburg, and tomorrow will be Philadelphia. We tried to stay somewhere central to all of our PA destinations, but we quickly discovered that while the RV park in Dutch Country seemed geographically convenient, it wasn’t close to any major freeways. From where we were staying in Narvon, PA, the drive took about 2 hours for us to reach Gettysburg.

After driving through the quaint downtown area of Gettysburg, we visited the Gettysburg National Military Park Museum & Visitor Center. Our history lesson began with a film about the Civil War. We then viewed the Gettysburg Cyclorama titled “The Battle of Gettysburg”. The 360 degree circular oil painting measures 42 feet high and 377 feet long, making it 4 stories high and longer than a football field.

The sheer size of the painting is impressive on its own. But add in the supplementary 3D props, lighting effects and battle sounds, and the painting suddenly comes to life with an entertaining interactive experience. Nevertheless, I was disappointed that the cyclorama didn’t rotate. Having the different battle scenes pass by while being encircled by the painting definitely would have increased my viewing pleasure. However, the massive cylindrical painting was still an incredible sight.

After leaving the cyclorama, we entered the Gettysburg Museum of the American Civil War and were instantly overwhelmed. The museum seemed never-ending with countless historical items from the Civil War, including clothing, equipment, weapons, etc. You could probably spend days in the museum and still not see or read it all. I must say, I had never really enjoyed history or museums in the past. This journey has forever changed that, igniting my appreciation for our country’s history and artifacts. Knowing we still had much more to see of Gettysburg National Military Park, we pried ourselves away from the museum. From the Visitor Center, we headed out in our truck on a 24-mile self-guided auto tour of the battlefield. While my attraction to history has grown significantly, I’m still about as far off from a “war buff” as one can be. As we drove past the battlefield sites, I wasn’t interested in the battles themselves. Countless canons, monuments and statues lined the streets, ranging in size and detail. The surrounding countryside was also breathtakingly beautiful and serene.

Much like the Freedom Trail in Boston, following the map was like being on a scavenger hunt. As we drove along the route, I was perpetually eager to see the next site marker. There were 16 stops on the auto tour, and we made it to all of them.

The self-guided tour concluded at the Gettysburg National Cemetery, the setting for Abraham Lincoln’s Gettysburg Address. As the final resting place of more than 3,500 Union soldiers, the cemetery was a fitting ending point for the tour. Seeing the graves gave even more significance to the battlefield sites where these men were killed defending the beliefs of our now united country.