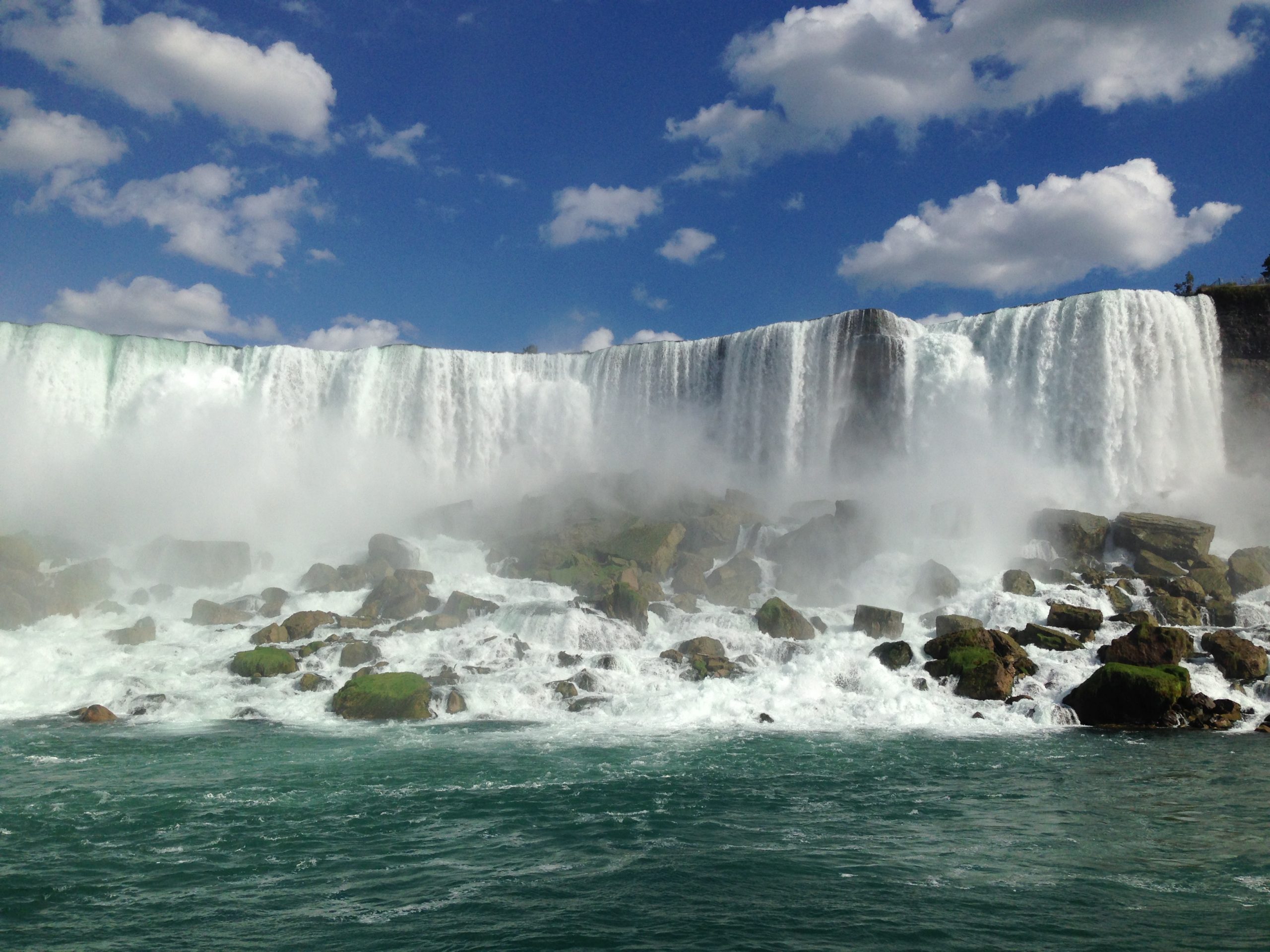 The last few days with my family were quite entertaining, and we thoroughly enjoyed their company! It was so fun being able to finally introduce Justin to everyone! However, Justin and I were slightly worn out from all the socializing. We got the feeling that my grandma was also spent when she lovingly kicked everyone out of her house, practically saying “You don’t have to go home, but you gotta get out of here.” Haha! She’s a character. 🙂

Getting up and moving was a challenge this morning, but we managed to get on the road and leave the Canton area. As we drove north through Ohio, we passed downtown Cleveland and continued driving east alongside Lake Eerie. When we reached Pennsylvania, we were delighted to see that the yellow wildflowers from Ohio had been joined by the addition of white and purple flowers sprinkled throughout them.

Immediately upon entering New York, we hit a toll road and had to pay over $5 (surprise, surprise). Niagara Falls was the primary landmark we were interested in seeing in upstate New York. On our way there, we passed through Buffalo, NY and continued to our campground in Grand Island, NY. Most campgrounds we stay at seem to be around 30-40 miles from the cities or points of interest we want to visit. However, we would be staying just 9 miles from Niagara Falls State Park. How convenient!

We had decided to stay in the Niagara Falls area for a few days. We wanted to be able to take our time, which contributed to our late start this morning. Eventually we made our way to Niagara Falls State Park, the oldest state park in the United States! Niagara Falls actually consists of three separate waterfalls: American Falls, Bridal Veil Falls and Horseshoe Falls.

As we approached the park, we could see the mist rising up from the falls, conveying an anticipatory insight into the size and grandeur of Niagara Falls. Niagara Falls has always been on our bucket list of things to see, and we were excited to be able to cross it off. After finding nearby parking, we walked through the park to the Cave of the Winds Tour to get a close-up look at the falls.

Once we had donned our souvenir plastic ponchos and specially designed foam sandals, we took an elevator down 175-feet into the Niagara Gorge. When we stepped out of the elevator, we were at the thundering base of Bridal Veil Falls. The viewpoint from below the waterfall was incredible, and the power of the cascade could be felt to the core. We were sprayed by the misty water, which amplified our awareness of the massive waterfall’s proximity.

Wooden walkways along the Niagara River led us to the Hurricane Deck where we experienced tropical storm-like conditions. Winds can blow up to 68 MPH beneath the falls (it’s called “Hurricane” for good reason)! This is the closest you can get to Niagara Falls, any closer and you’d probably be washed away by the force of the waterfall and carried down the river. The gusts on the deck whip the water around, saturating any area not covered by the plastic poncho.

Justin made it his goal to be completely drenched by the waterfall, which didn’t take long on the Hurricane Deck even while wearing his poncho. As he stood under the fall, the torrential water poured down on him, completely permeating all available gaps in the plastic cover. Justin was quite pleased with his successful soaking.

The entire experience was unforgettably amazing! I highly recommend doing the Cave of the Winds Tour! The cost at just $12/person is worth every penny in our opinion, especially considering that the entire walkway has to be disassembled every winter and then reassembled each spring to prevent them from icing over.

We had considered also doing the famous Maid of the Mist boat tour. However, by the time we were done with the Cave of the Winds Tour, the Maid of the Mist was closed for the day.  So instead we walked through Niagara Falls State Park.  We ended up taking the pedestrian bridge over the Niagara River to Prospect Point where we were able to view the top of the falls.

After not being able to ride the Maid of the Mist yesterday while we were at Niagara Falls, we were debating whether or not it was worth going back for today. We felt that the experience we had at Cave of the Winds was unbeatable, and we had already seen some excellent views of the falls.

But we still had one more day in upstate New York, and we were only 9 miles from Niagara Falls. Plus, can you really see enough of the stunningly colossal falls? Absolutely not! Also, we stuck with our “no regrets” theme and decided it was a must-do! With this paramount determination, we went back to Niagara Falls to ride the Maid of the Mist.

We definitely made the right decision! This was a clear sunny day, whereas yesterday was overcast and gray. We would now be able to see the waterfalls in literally a whole new light! The lighting even created a rainbow! Plus, the boat ride was awesome! It gave us entirely different view of the American and Bridal Veil Falls. It also allowed us to fully see and appreciate Horseshoe Falls.

Before we had only been able to see a sliver of Horseshoe Falls from a distance. Not until we were on the boat approaching the falls did we realize we had almost missed seeing them in their entirety along with one of the most impressive views!

The short boat ride was only about 30 minutes round-trip, just long enough to get a good look at all three of the Niagara Falls. We were given ponchos to wear for the tour, but we didn’t get nearly as wet as we thought we would on the Maid of the Mist (we were dry in comparison to the Cave of the Winds). Surprisingly, the ponchos were more of a hindrance than an aid.

The boat doesn’t get close enough to the waterfalls to truly soak the passengers. We experienced more of a light misting and would have preferred to have not worn the ponchos, which whipped around in the wind and photo-bombed several of my photos, blocking some good shots. Nevertheless, the boat ride was completely worth it at just $17/person!

After riding the Maid of the Mist, we walked around and went to the Observation Tower, which provided an excellent view of the American Falls as well as a partial view of Horseshoe Falls. We could also see the Canadian town of Niagara Falls, Ontario across the river. We then realized we were only 15 miles from Lake Ontario!

We had already seen Lake Michigan several times: in Milwaukee, Chicago and while driving through Michigan.  We had also seen Lake Eerie earlier today, but we were excited for the chance to see another one of the Great Lakes! It seemed like the closest and best place to do that was at the Fort Niagara State Park, so that’s where we went. We thought there might be a view of the lake from somewhere in the park. We were elated when we parked and were able to walk down to the water’s edge of the lake! We were even more delighted when we noticed the skyline of Toronto across the lake!

Lake Ontario was the first of the Great Lakes we had been to where we could actually see something on the other side of the lake. Toronto was tiny in the distance, which really put into perspective just how massive the Great Lakes truly are. With that understanding, we dipped our toes in the waters of Lake Ontario, allowing us to now be able to say that we have officially been in one of the Great Lakes!

Join the Next Destination Unknown Nation to access the Treasure Chest of Freebies and get your free resources for Blogging, Travel, RVing, and Hiking!