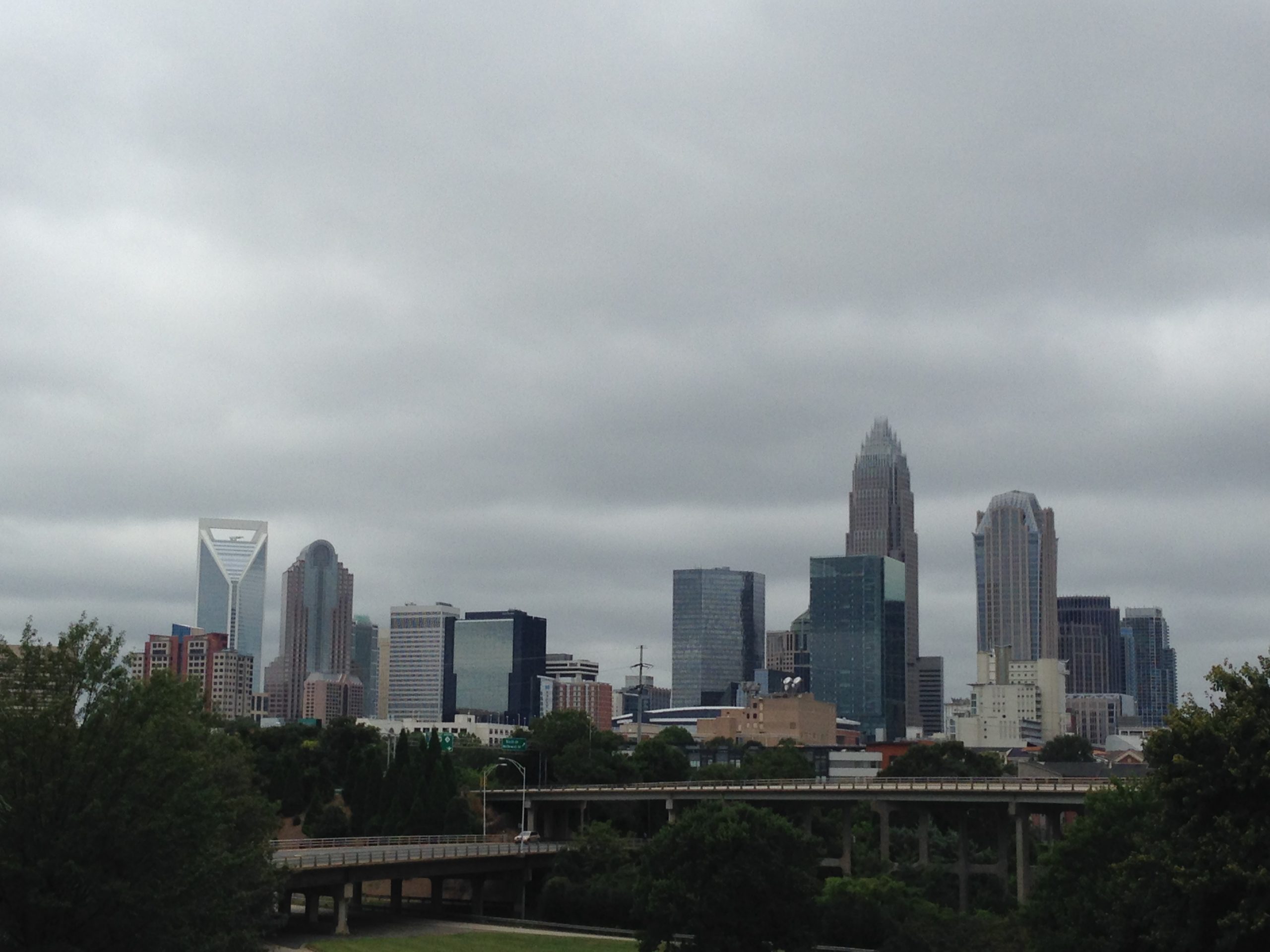 After having to put the trip on hold to fly out to Las Vegas for a family emergency, I returned to Charlotte late last night. While in Vegas, I managed to catch a cold. However, even though I was sick, I didn’t let it get me down. I was anxious to see Charlotte. Justin had already scoped out the area while I was away and was looking forward to showing me around.

He began the tour by taking me to the upscale South Park neighborhood, home to Charlotte’s Nordstrom, Whole Foods and the high-end SouthPark Mall. We enjoyed driving through the surrounding woodsy residential section near Randolph Road. It seemed like a really nice area. Next we headed into downtown Charlotte. We noticed several chain restaurants though, which led us to believe that the downtown area wasn’t as edgy as we had been hoping it would be.

We continued driving and ventured into the hipster sections of Plaza-Midwood and NoDa. They seemed somewhat rundown and were bordered by some sketchy neighborhoods. However, they also appeared to be amidst the early stages of a revitalization. Also, while somewhat rough, the small areas packed in a lot of diversity with their colorful storefronts.

We ended up having lunch at Amelie’s French Bakery in NoDa. We loved the eclectic cafe with it’s random pairings of furniture, decor and lighting. It definitely had the funky factor I had been looking for in Charlotte! Plus, the food was good too.  🙂 If we lived in Charlotte, we would be regulars at Amelie’s!

We left Fort Mill, SC and the Charlotte, NC area today and continued north into Virginia. The narrow west end of Virginia seemed to be green and hilly with a good balance of trees and grass. We didn’t stop in Virginia though because we plan on spending some time in Richmond, VA when we work our way down the East Coast. We passed through the beautiful Jefferson National Forest in the Appalachian Mountains.

After taking a long tunnel through the hillside, we reached West Virginia. While driving in the small state of West Virginia, we had to pay 3 separate tolls, each for $2.50 totaling $7.50! Have I mentioned how much I hate toll roads? We eventually reached Charleston, WV, which seemed like a very industrial town. After driving over the Kanawha River and continuing west for another 30+ miles, we made it to our campground in Milton, WV where we hunkered down for the night.

Instead of spending the day in Charleston, WV, as we originally planned, we decided to press onward to Ohio where we would be visiting my dad’s side of the family. I was really excited to see my family members, some of whom I hadn’t seen in over 15 years! It was a rainy and foggy day as we drove through West Virginia. Eventually the clouds cleared and we passed the Ohio River, which divided the state lines of Ohio and West Virginia.

Once in Ohio, we were pleasantly surprised with the scenic landscape and how pretty it was with it’s variety of colors. Rather than just strictly green, there were golds and rusty plum shades mixed in as well. The vibrant yellow wildflowers scattered along the freeway also added to the scenery.  We decided to stay in Amish country because Justin had never been before. It was pretty far from my Grandma’s house in Canton, OH, but I’m glad we stayed there. The rolling hills of the countryside were beautiful!

The first RV park we went to didn’t work out though because there were no public restrooms. This might not seem like it should be an issue since our RV has a bathroom, but when we first picked up our trailer, we agreed to only use our toilet for #1 (urine). TMI (too much information)?

After seeing the sewer hose disaster in the movie RV, we knew that was something we never wanted to encounter! Watch the movie trailer below to see what I’m referring to (fast-forward to 1:53 for the sewer scene). Plus, it’s unpleasant enough dealing with just urine in the sewer hose as the tank is emptied. We didn’t want to add to the stench and messiness.

Therefore, anything more than #1 needs to be handled in a public restroom. We really didn’t want to have to start using our toilet for “more.” All of the RV parks we had been to up to this point had restrooms, so we were shocked when this one didn’t. I’m glad we noticed the lack of a bathroom though before we got checked in and set up at the campsite. Luckily we found another campground with a public restroom just a few miles down the road.

Initially I didn’t want to leave the Amish country. It was so beautiful with it’s hilly sprawling farmland, rich with shades of green and covered in swaying stalks of corn. We even saw some Amish folk and horse-drawn buggies! I’ve always been intrigued and charmed by the simple Amish lifestyle.

However, the enchantment quickly wore off after driving through the winding back roads of the Amish country a few times. There were no major highways, and the narrow 2-lane roads we had to take seemed to zig-zag back and forth, making the 30-some miles to and from my grandma’s house feel as though they were doubled.

Also, there are no lights while driving at night through the Amish country. The pitch-black farmlands were pretty spooky. We kept waiting for someone to pop out from the cornfields on the side of the road. During the long drive, our imaginations produced quite a few typical horror movie scenarios. Luckily we survived though. Haha!

In addition to the long, dark route through Amish country, Justin also lost his interest in the area when he realized there was a constant manure scent to the air. Plus, there were no Starbucks. Justin needs his modern conveniences, and I suppose I don’t mind them either.

The next few days were spent with my family at my grandma’s house in Canton, OH. It felt like a small, intimate family reunion. This was also the first time Justin had met my family in Ohio. Rather than sight-seeing, we thoroughly enjoyed being able to focus on catching up with family.