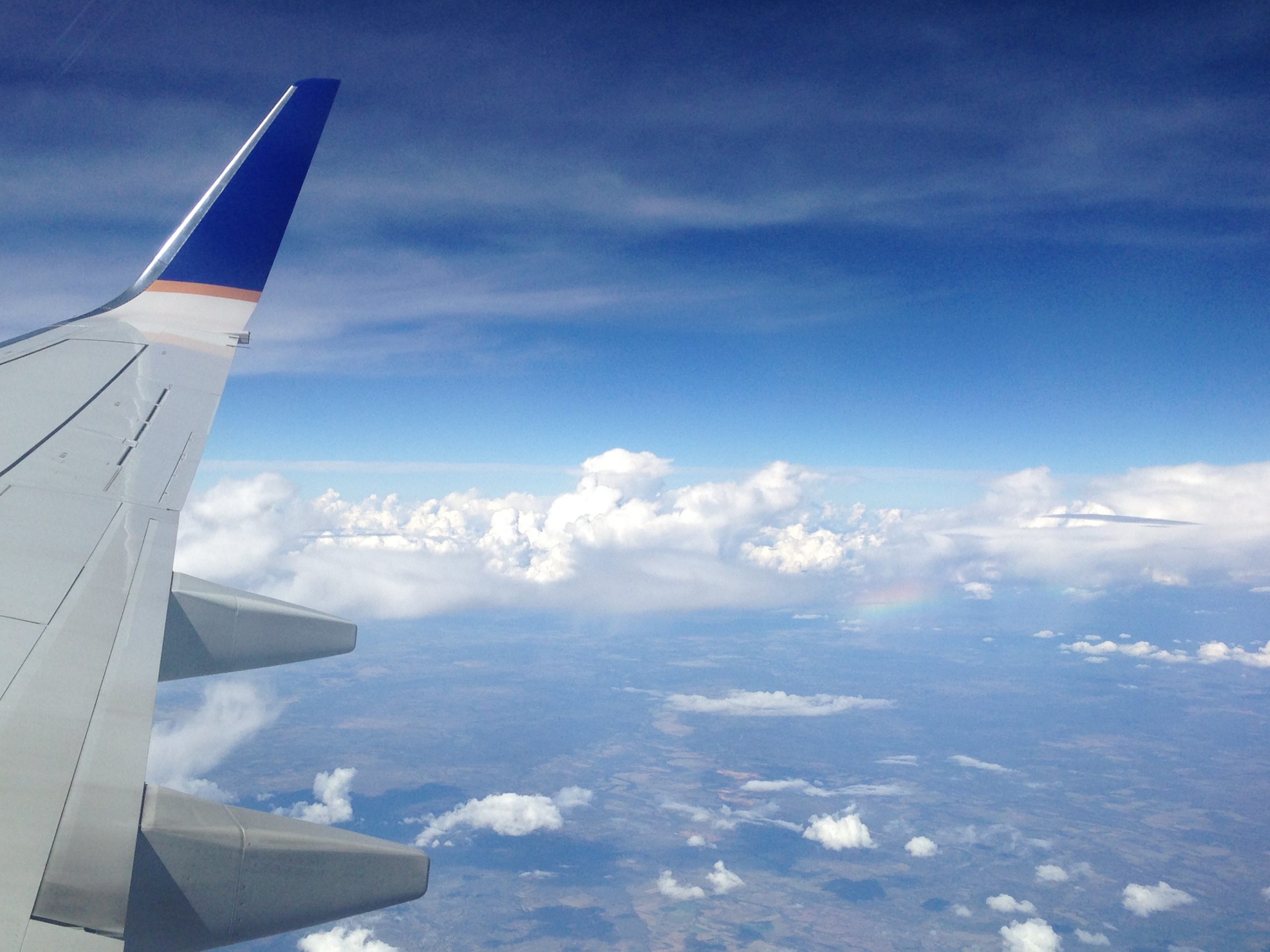 As much as I love having a plan, I’ve learned that you can only plan so much before life takes over with it’s own plan. As I mentioned in the last blog posting from Day 95, a family emergency arose during our trip. My grandmother in Las Vegas had a serious stroke and was in the hospital not doing well. Justin and I decided to put our trip on hold, so I could be with my family. I flew from Charlotte, NC back to Vegas today. It was really hard to leave Justin and the pups after being together for 95 days, but I knew it was what I needed to do.

As I sat in the plane looking out the window at the distant shapes of buildings, roads, land and bodies of water tens of thousands of feet below me, I was suddenly hit with the intense realization of just how much area Justin and I have covered on our trip. The cars were so tiny down on the ground, they looked like pinpricks on the real-life map of the country, emphasizing my awareness of the distance we had already traveled during our journey. The immense size of the contiguous United States is mind-boggling!

Judging the amount of land from the ground truly does not do the space justice. Being up in the air gave a much better picture of how far we had actually driven and how much we had already seen. I wondered how many planes had flown over us as we were driving along the road and how many of their passengers had seen us as a pinprick on the landscape. How many of the buildings, roads, land and water below me had we seen in person? I wished I was on one of those roads instead of in the plane soaring over them. Flying back west from Charlotte to Las Vegas felt like I was undoing all the driving we had done so far, unraveling all that we had accomplished for the metaphorical sweater of our journey.

The scattering of clouds across the atmosphere cast shadows on the earth’s surface below. It seemed like I was worlds away from the land we had been traveling through. I felt lost. I wanted to be on the ground under the clouds, not up in the sky with them. Flying was cheating. Seeing things from a distance is not the same as seeing them up-close. Don’t get me wrong, both vantage points have their benefits. But looking at something from afar doesn’t allow you to see it’s details or texture.

Can you spot the tiny rainbow?

Eventually, the clouds thickened, obscuring my view of the earth below. Not being able to see my progress across the country was helpful. It was what I needed to help me forget the troubling details of my situation.  As I gazed out at the clouds though, they began to dissipate, and I saw a small, faint, nearly insignificant sliver of a rainbow. I stared at the miniscule rainbow in disbelief. It was so inconspicuous, I was shocked that I had noticed it. And as corny as it sounds, I felt honored that the rainbow had shown itself to me.

It was perfect timing really. I had been deeply saddened by my grandmother’s state of health and conflicted with needing to pause our once-in-a-lifetime journey. Call it cliched, but the rainbow seemed like a sign, a reason to have hope and a reminder that everything would work itself out one way or another (something I always tell myself but sometimes forget). The rainbow vanished shortly after it appeared, lasting just long enough for me to appreciate it.

As the plane approached Las Vegas, nostalgia swept over me as it always does when I visit my hometown. Seeing the different mountain ranges surrounding the Vegas valley also made me realize how much I missed mountains. We hadn’t been near any major mountains during our travels recently other than the Smoky Mountains. They don’t count though (read my post about the Great Smoky Mountains National Park to understand why I consider the Smokies to be more hills than mountains). 😉 It was refreshing to see some actual, West Coast mountains!

Once I landed in Las Vegas, I headed straight to the hospital where my grandma was and spent the majority of my time there over the next few days. She wasn’t doing good when I arrived, and it seemed like she was on her deathbed. My grandma’s health continued to decline. In addition to her stroke, she developed pneumonia as well as atrial fibrillation, and she ended up in the ICU.

However, even though she wasn’t necessarily getting better by the end of my visit, it seemed like she was finally stable. I could leave knowing she was on her way to recovery.

On the evening of my last day in Vegas, there was a massive, vibrant rainbow spanning across the sky. Another undeniable sign! This was confirmation that I had made the right choice to postpone the trip and fly back across the country to be with my family when they needed me. No regrets!

Best Hiking Gear for Beginner Hikers: Everything You Need for a Day Hike

Want to hit the trail for a hike but not sure what hiking gear you need? Here’s the best hiking gear for beginners with hiking essentials for every trail.