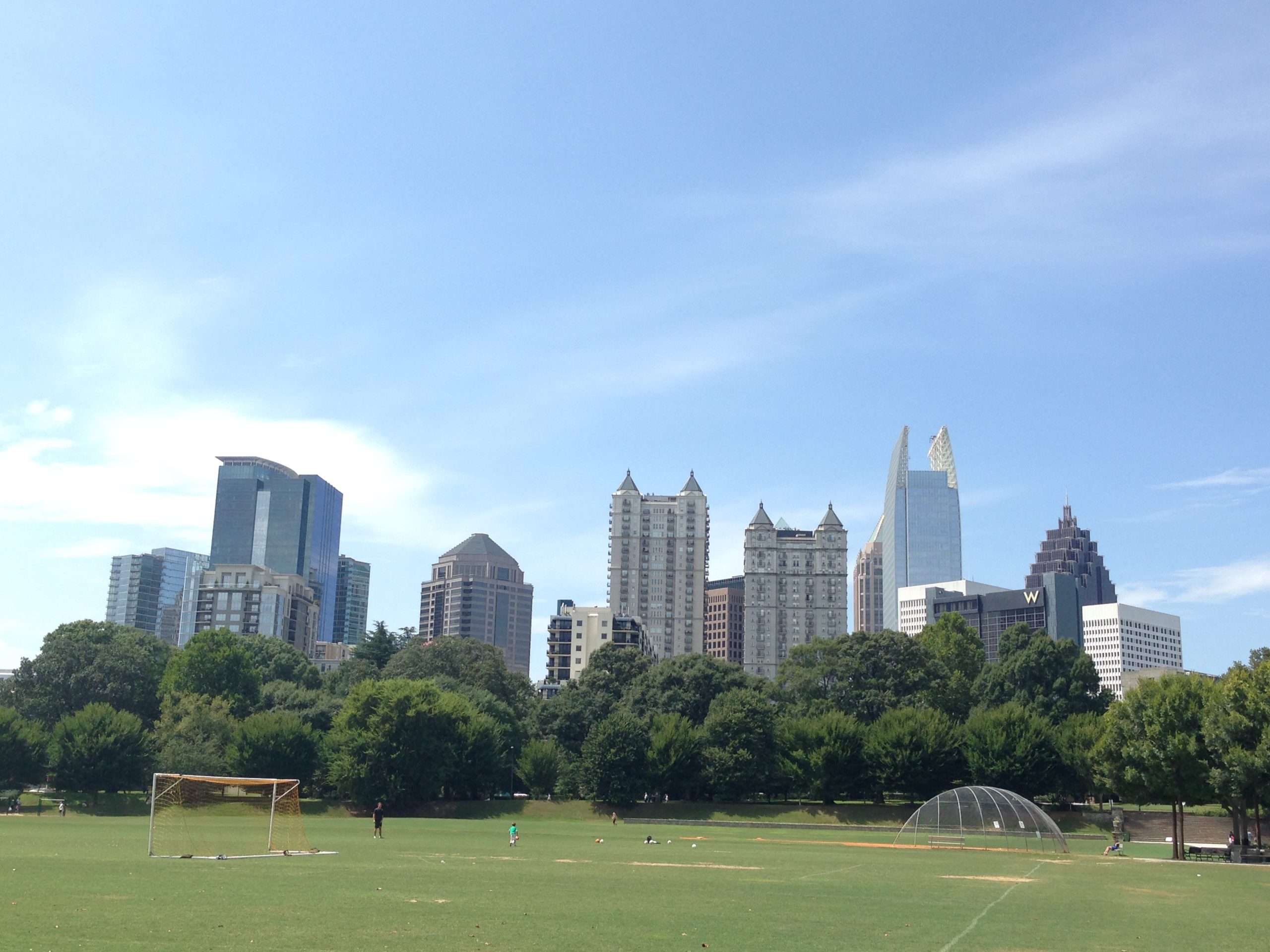 Not only is today Labor Day, it’s also our 3 month anniversary of being on the road! Time is flying! We’re excited to see Atlanta! Wanting to also check out the Atlanta suburbs, we drove through Marietta and came across Douceur de France, a French bakery and cafe. Since the cafe seemed to be busy, we decided to eat there. We tried Le Croque Monsieur and Le Pain Perdu (French Toast), both of which were really good. I particularly enjoyed Le Croque Monsieur. I like trying new things. It reminded me of a cross between a croissant and a much better version of a Hot Pocket. 🙂

Next we drove through Smyrna, another Atlanta suburb. However, we weren’t fans of the area, so we continued on to downtown Atlanta. As we first approached the downtown, it seemed rundown and dirty with numerous abandoned buildings and homeless people. We were really disappointed (as well as slightly depressed) and weren’t sure if it was worth seeing more of.

Luckily though we kept driving and came upon the hip, vibrant, much nicer section of Midtown in-between Downtown and the high-end area of Buckhead.  There were countless restaurants with packed outdoor seating, giving a lively energy to the area. The neighborhood surrounding Midtown was great as well with its historic houses varying from Tudors to Craftsmans and many other styles in-between. We also enjoyed walking around the large Piedmont Park with the pups. The 189-acre park is massive with playgrounds, dog parks, sports fields, a public pool, bike trails and miles of paths for walking and jogging.

We didn’t make it too far in the park though because we were all dying in the heat and humidity. We finally understood the meaning of the term “Hot-lanta.” Haha! We hopped back in our air-conditioned truck and continued exploring the Atlanta area. Next we drove around Buckhead where Atlanta’s Nordstrom and Whole Foods are located. The Buckhead area was really nice. We were impressed by its neighborhoods and their sprawling homes. If we were going to live in Atlanta, it would have to be in Midtown or Buckhead.

After seeing Nashville, Knoxville, Sevierville, Pigeon Forge and, last but not least, Gatlinburg, we thought we were done with the state of Tennessee. But we ended up going back into Tennessee today to see Chattanooga. Surprisingly, we were charmed by the quirky city with its antiquated brick buildings and small town vibe. We especially liked the Tennessee River running through Chattanooga and enjoyed walking over it on the pedestrian bridge.

Every once in awhile on this trip we’ve come across things we weren’t planning on but couldn’t pass up once we discovered them. One of those fortunate discoveries was Ruby Falls in the cave at Lookout Mountain just outside of Chattanooga! At 145-feet high and 1,120-feet under the earth’s surface, Ruby Falls is the world’s highest underground waterfall open to the public!

The waterfall was discovered by Leo Lambert, a local cave enthusiast, and he named it for his wife, Ruby. Mr. Lambert had to crawl for hours through an opening just 18 inches high and 4-5 feet wide to reach the waterfall. That’s determination! The round-trip journey took him about 17 hours! He later went back with his wife who also crawled through the same tight passageway to see the waterfall, in a dress no less! She definitely deserved to have the waterfall named after her! 🙂

They now give tours of the cave and waterfall. Fortunately for us though, they have since expanded the space to get to Ruby Falls, so we didn’t have to squeeze through the super narrow crevice that was once the only way to get to the waterfall.  While on the tour underground, we also got to see some cool cave features, such as stalactites (formations growing from the ceiling of a cave), stalagmites (formations on the floor of a cave) and columns (formed when stalactites on the ceiling grow long enough to connect with stalagmites on the floor).

There were signs along the way pointing out formations resembling certain objects or food. The best part though was the waterfall of course! With dramatic music playing, special lighting effects transitioned between several different colors, illuminating the cascading water and it’s surrounding rock backdrop.  While the music and colored lights could potentially be considered tacky, they were fun and added to the grandeur of the waterfall!

We were getting closer to Charlotte, but at this point, we still weren’t sure where we would be staying when we got there. When looking at campgrounds online, it didn’t seem like there were any good options. We ran into this same issue in Seattle and ended up staying 80 miles outside of the city. Since we weren’t having any luck online, we decided to check out some campgrounds in person before booking a site.

However, shortly before reaching the Charlotte area, I received a phone call from my mom, saying that my grandma in Las Vegas had a stroke. She was in the hospital and wasn’t doing well. My mom lives in Massachusetts and was going to fly back to Vegas the next day to be with my aunt and grandma. I’ve always had a very special relationship with my grandma and knew if she passed away before I was able to see her one last time, I would regret it for the rest of my life. And since mine and Justin’s motto for our trip has been “No regrets,” I decided I should also fly back to Las Vegas to be with my family.

I would be going to Vegas by myself though since Justin would have to stay with the dogs and the trailer. But where they would be staying while I was gone was still up in the air. I needed to find a flight to Vegas, but first we needed to find a campground. After driving to 4 different campgrounds outside of Charlotte, none of which were ideal, we ended up back in South Carolina.

We found a campground in Fort Mill, SC about 15 miles from Charlotte, NC. It wasn’t great, but it was decent, and it was one of the closest RV parks to Charlotte as well as the airport. It also had cable TV and WiFi to keep Justin entertained as he held down the fort while I was away.

After getting set-up at the campsite, Justin went to work and booked me a next day flight from Charlotte to Las Vegas. I know he wasn’t excited about being stranded at a sub-par campground by himself, but my hubby’s sacrifice meant the world to me! I’m truly blessed to have such a selfless, supportive husband! I was so relieved to have a flight booked for tomorrow. This was a long, emotional, tiring day. At the end of it, we were both just content to have our trailer parked, so we could pass out.