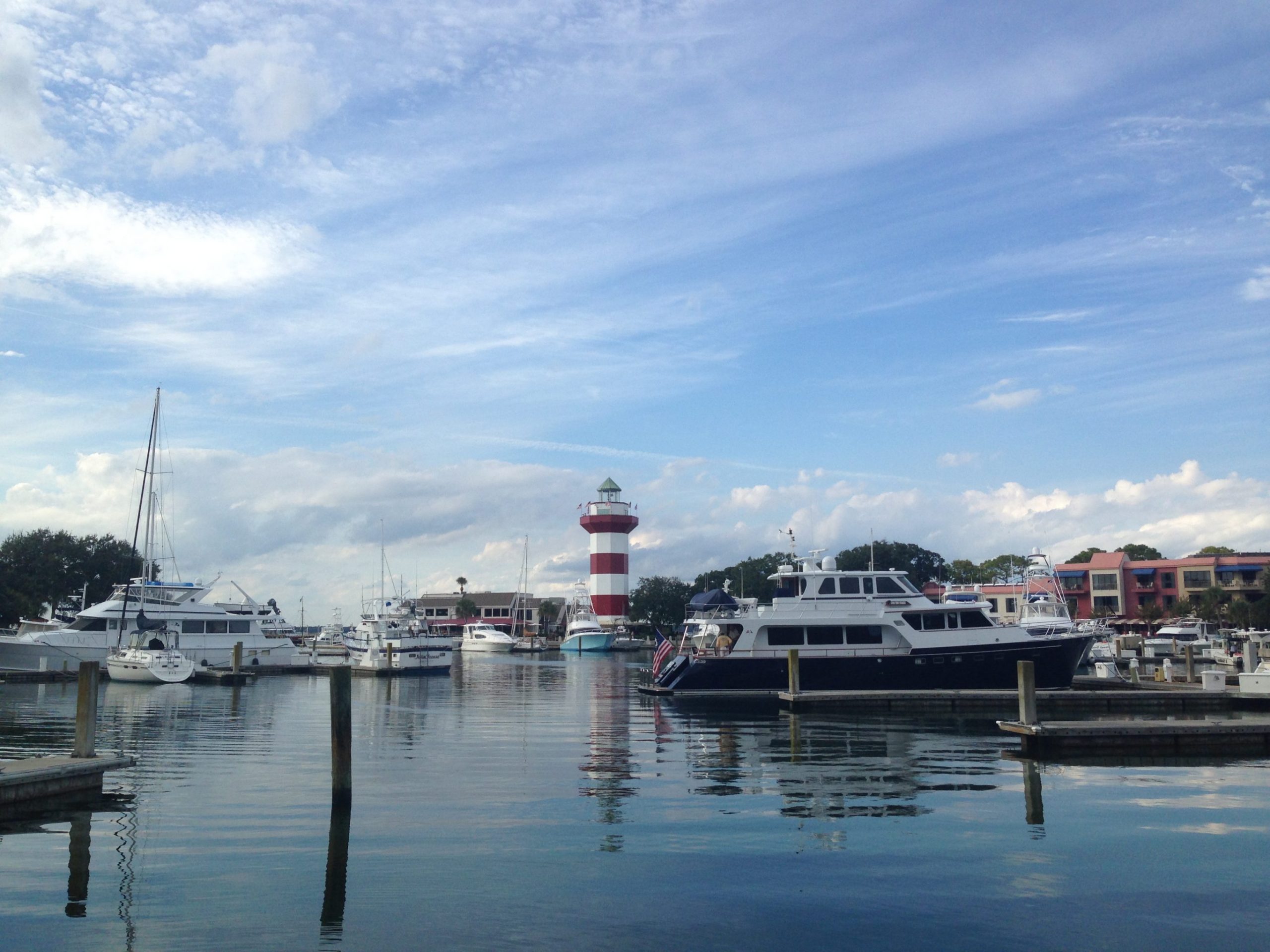 Even though we were done with Charleston, we weren’t quite finished seeing South Carolina yet. We had heard great things about Hilton Head Island, SC, and wanted to visit the area. With the island being only about 30 miles from Savannah, it’s actually much closer to Georgia than it is to Charleston, SC. As soon as we reached Hilton Head Island (HHI), we were impressed by the vegetation consisting of manicured lawns, lovely landscaping and majestic oak trees. Hilton Head felt classy like one massive resort. Most of the neighborhoods were private gated communities with golf courses and grand entrances. Between Charleston and Hilton Head Island, I officially adore the southern coast of South Carolina, known as South Carolina’s “Lowcountry.” For lunch, we stopped at Skull Creek Boathouse. There was a short wait for a table, so we made the most of our time and strolled over to the creek bordering the restaurant. As we walked along the boat dock, we saw an alligator in the water below as well as a sting ray! I still can’t get over the fact that South Carolina has alligators! We were seated outside where we enjoyed the weather and waterfront location. While we enjoyed the food and drinks, the atmosphere was the best part of the restaurant.

Next, we visited Coligny Beach Park. Before we even reached the beach, we were already impressed by the FREE parking! How refreshing (especially coming from California)! There was also a free WiFi hotspot provided by the town of Hilton Head! How generous of HHI! Since we’ve been traveling, we have a whole new appreciation for free WiFi. In addition to the parking lot and WiFi, the beach had an actual entryway with beautiful shrubbery and fountains. The entrance for Coligny Beach included the nicest beach bathrooms I’ve ever seen plus separate changing rooms and foot showers.

Adding to the relaxed ambiance were tropical palm trees, Adirondack chairs and swinging wood benches for people to enjoy the ocean breeze. Leading out onto the sand was a mat-type walkway like a red carpet welcoming us to the beach. We were almost expecting paparazzi to jump out and start snapping photos. Haha! Aside from providing the royal treatment, the walkway also prevented your feet from being covered in sand. Brilliant!

As for the beach itself, the fine white sand was compacted close to the shoreline. This must be the least sandy beach we’ve ever been to. Not having to worry about sand making its way into every nook and cranny makes for an even better oceanfront experience. There were even chairs and umbrellas available to rent. They thought of everything when it came to Coligny Beach! And if all that wasn’t enough to dub this beach one of our all-time favorites, it’s also dog-friendly! Bravo, Hilton Head, bravo!

As we circled the island on the main road loop, we took a detour to the Sea Pines Resort. We wanted to see the Harbour Town Lighthouse located on the resort’s property. Even though parking was free, it still cost $6 just to enter the resort. An entrance fee seemed like a ripoff, but since we didn’t have to pay for any parking on the island, we figured it was a wash. Other than the lighthouse and boat-filled marina, there wasn’t much else to see or do in the area.

At this point, we felt that we had seen the majority of the island and decided to call it a day. We had originally planned on only being in Hilton Head until the early afternoon. We thought we’d have enough time to also go back into downtown Savannah and then visit Tybee Island. So much for that plan. We enjoyed Hilton Head Island so much that we ended up spending the entire day there.

Overall, Hilton Head Island feels like a very safe, resort-type community with a healthy dose of tourism and outdoor activities mixed in. The island was quiet, and we had no issues with parking since it was the off-season. I’m sure summertime in Hilton Head is a different story though. With a relaxing vibe, oceanfront setting and plenty of greenery, we’re placing Hilton Head Island on our list of potential new home locations!

Since we’re considering HHI for our final destination, we wanted to also investigate the surrounding area. Hence, on our way back to Savannah, we drove through Old Town Bluffton. Only about 8 miles from Hilton Head Island, Bluffton is a convenient suburb where many of the people who work on the island live. We drove to the end of Calhoun Street and reached the Harbor River as well as the historic Church of the Cross. There were also some crafty antique shops along with a few eateries and bars.

The locals in Bluffton seemed like a younger crowd than Hilton Head, and there were more chain retail stores in the area. These features make Bluffton an option if we did decide to live near Hilton Head Island, especially since HHI seemed to consist mostly of vacation rentals. Good thing we did some scouting! 🙂

Since we didn’t get to see more of Savannah yesterday like we had wanted to, we were going to extend our stay at the RV park for an extra day. Unfortunately though, the park was already booked for the night, so we had to move on. As we were packing everything up and hooking the trailer up to the truck, we noticed water was pouring out from under the trailer! It’s never a good thing when water is coming from somewhere it’s not supposed to. We were scared to look but knew it had to be done. With complete trepidation, we peered underneath the trailer and saw a huge tear in the lining where the water tanks are located.

Luckily, our travel trailer was still under warranty, so we were relieved that the repairs would be covered. On the other hand though, our options were extremely limited for where we could take the trailer to be fixed. The closest location was the Camping World in St. Augustine, FL. The other downside to warranty work is that we had to wait for the repairs to be approved by the manufacturer and then wait for the parts to arrive. We had no idea how long the process would take. We were stressing! Since we’re living full-time in our RV, we were basically going to be homeless while it was in the shop. Also, warranty work isn’t a priority, so Camping World couldn’t get our trailer in for 6 more days (Monday, 10/27/14)!

Our next destination was Jacksonville, FL. Instead of only spending a few days in Jacksonville like we had originally planned, we had to extend our stay until we could get the trailer repaired. But based on the online reviews of the RV parks in the Jacksonville area, we weren’t excited about staying at any of them (especially since we were going to be there longer than we had wanted). So on our way down to Florida, we ended up staying about 60 miles north of Jacksonville, FL, in a nice park located in Brunswick, GA. This was our base camp for about a week while we waited to take our trailer to Camping World.

Join the Next Destination Unknown Nation to access the Treasure Chest of Freebies and get your free resources for Blogging, Travel, RVing, and Hiking!

This website uses cookies to improve your experience while you navigate through the website. Out of these cookies, the cookies that are categorized as necessary are stored on your browser as they are essential for the working of basic functionalities of the website. We also use third-party cookies that help us analyze and understand how you use this website. These cookies will be stored in your browser only with your consent. You also have the option to opt-out of these cookies. But opting out of some of these cookies may have an effect on your browsing experience.
Necessary Always Enabled
Necessary cookies are absolutely essential for the website to function properly. This category only includes cookies that ensures basic functionalities and security features of the website. These cookies do not store any personal information.
Non-necessary
Any cookies that may not be particularly necessary for the website to function and is used specifically to collect user personal data via analytics, ads, other embedded contents are termed as non-necessary cookies. It is mandatory to procure user consent prior to running these cookies on your website.
SAVE & ACCEPT