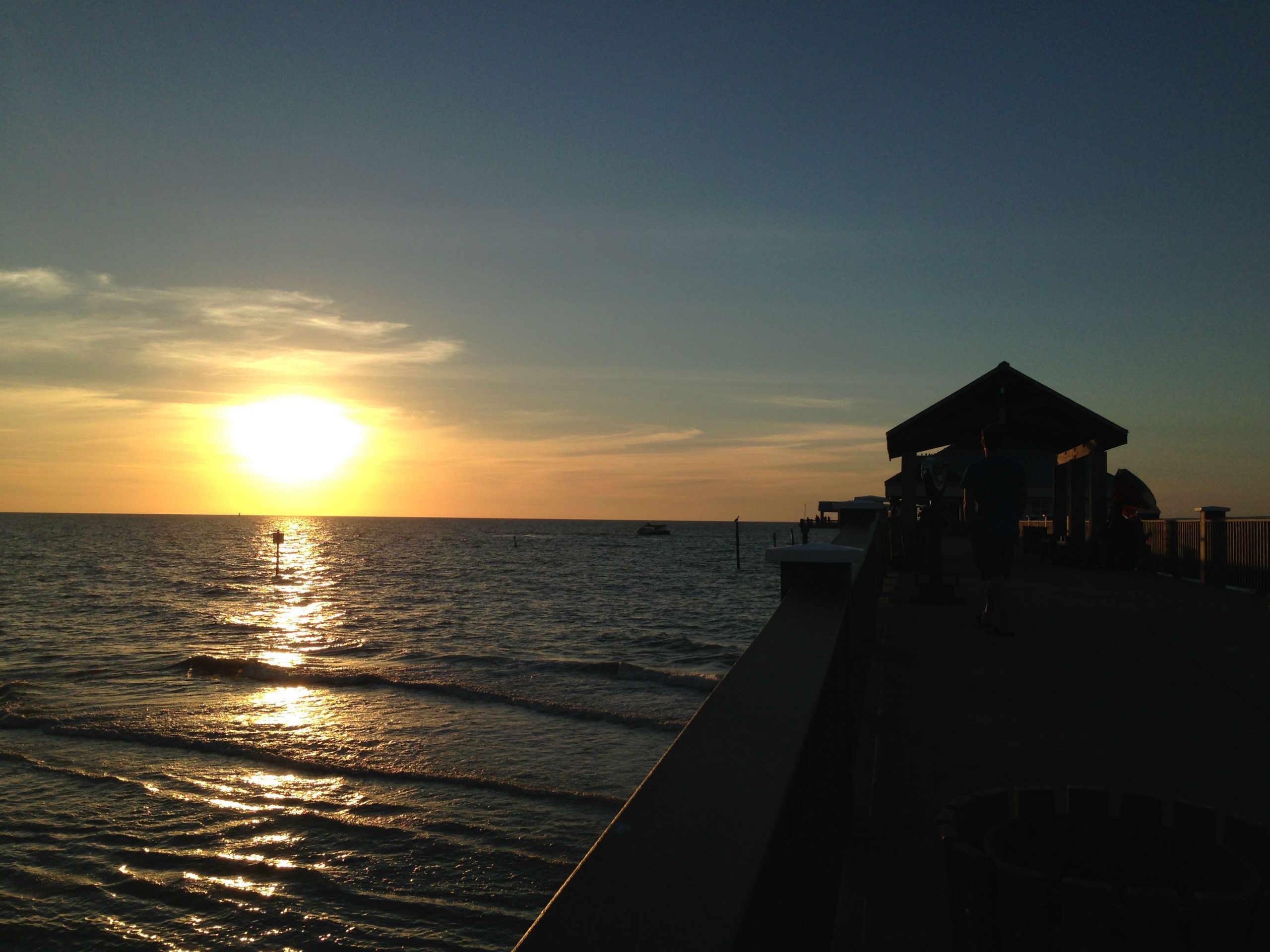 View of the Bay from The Village on Venetian Bay

Since we didn’t arrive in Naples until late last night, we wanted to explore the city before we headed up to Tampa. The first place we came across was The Village on Venetian Bay. The waterfront shopping center contained fine dining restaurants along with high-end fashion and home décor stores, all of which were out of our price range. Knowing it was pointless to even look at the expensive shops, we did a quick walk through and went on our way.

Next, we visited Naples Beach where we caught a glimpse of the pier. The beach consisted of fine white sand, but the water still had a grey hue to it rather than the blue we had been hoping for in Florida. Unfortunately, we didn’t have time for a day at the beach anyway, so we continued our tour of Naples. Our course brought us to Tin City, another shopping complex situated on the water. We perused the eclectic eateries, gift shops and specialty stores housed in the collection of colorfully painted tin buildings.

Naples also had a sophisticated little downtown area including the Historic 3rd Street South and 5th Avenue South, nicknamed “The Heart of Naples.” The palm tree-lined streets featured various boutiques, galleries and cafes. There were more Italian restaurants than we could keep track of, which made sense considering that Naples, FL, is named after an Italian city. As one of the wealthiest cities in the United States, the classy town of Naples seemed like an upscale community with a well-off, more mature population. We’ll have to keep it in mind for our golden years. 🙂

On our way to Tampa, we passed through Treasure Island Beach adjacent to St. Petersburg. The beach town sounded promising. With the name “Treasure Island,” you’d expect a tropical utopia perhaps with two crisscrossed palm trees forming an “X” to mark the spot. But instead there were mostly just casual beach houses with a few motels and bars. I will say, however, that the beach itself was nicer than I expected based on the town. The sand was not marred with clusters of dried seaweed like many of the other beaches in Florida. With the sun setting, the tall grasses bordering the beach glowed in the gilded light.

For our day in Tampa, we had lunch at the Columbia Restaurant, the first and oldest restaurant in Florida as well as the world’s largest Spanish restaurant! Our meal began with loaves of hot, flaky Cuban bread. We then shared one of their famous 1905 salads, which the waiter constructed at our table. We probably should have just had the substantial salad as our meal, but we couldn’t stop there with so many other items available to try!

Not being able to decide between several meal options, we ended up trying a few different tapas, including the Devil Crab Coquettes and the Stuffed Piquillo Peppers. By then, we had no room for entrees. However, we did manage to save just enough room to have the White Chocolate Bread Pudding for dessert.  😉

After leaving the restaurant, we made our way through downtown Tampa and reached Clearwater Beach.  We were surprised to see that even on the Gulf side of Florida, the sand bordering the water’s edge was covered with seaweed. However, people didn’t seem to mind as the deep stretch of bare white sand leading up to the shoreline made up for the encumbered section.

The extensive pier was hosting Sunsets at Pier 60, a free daily festival where vendors sell their arts and crafts while street performers entertain. The name of the festival was fitting as we were treated to a fabulous view of the sun setting over the Gulf of Mexico.  Perfect timing! As we took the causeway back to Tampa, the horizon was emblazoned with brushstrokes of fiery shades across the sky’s canvas, revealing where the day was transforming into night.