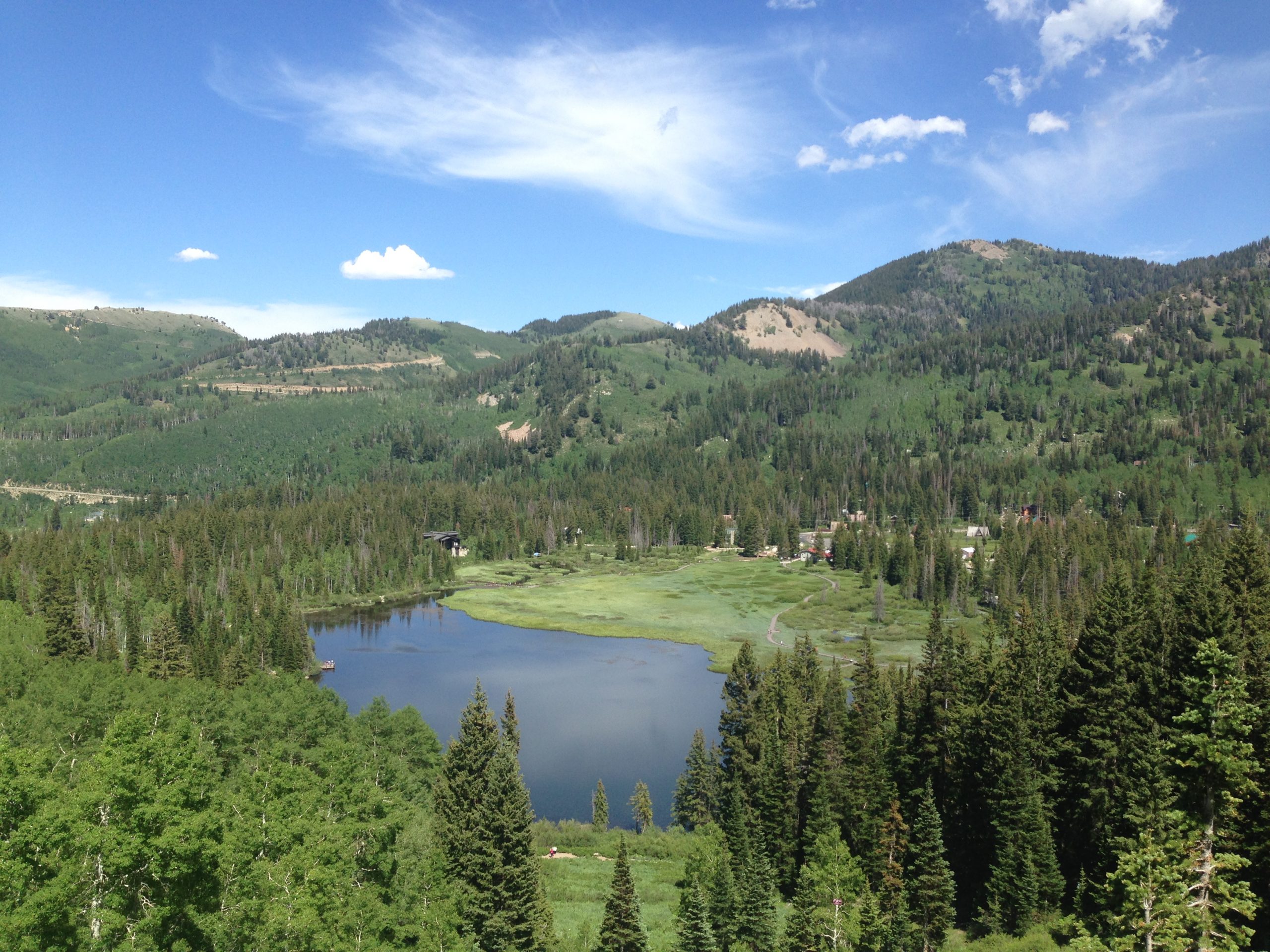 We used the campground’s amenities this morning by first playing several rounds of ping-pong. I usually win, but I must have been out of practice because Justin managed to beat me. Boo! Haha! The weather was perfect though, so we then swam a couple of laps at the nearby pool. Since it was such a nice day, we decided to stick with the recreational spirit and went back to Park City to ride the Alpine Slide, one of the longest slides in the world.

Last time we were in Park City, we had attempted to ride the slide, but the line was outrageous! We realized that going during a weekend probably wasn’t the best idea. It was definitely a good call to come back on a weekday. Since today was a Monday, the line was practically nonexistent. We rode the ski lift up to the top and then slid down the more than 3,000 feet of winding, luge-like track. Good times! Justin had ridden the slide multiple times in the past and actually dislocated his shoulder on it once, so we both took it fairly slow. Justin still managed to beat me though.   🙂

We then visited the Olympic Park where the Winter Olympics had been held in 2002. Justin had been there during the Olympics and watched the bobsled and ski jump competitions. He showed me the bobsled track, and then we made our way over to the ski jumps where we observed skiers practicing their jumps by landing in a pool of water below. It was quite entertaining to watch.

We’ve officially been on our journey for one month now! The first half of the day was spent watching the World Cup, but later in the afternoon we drove into Salt Lake City. We ran a few errands and then decided to celebrate our one-month road-trip anniversary by picking up some dessert from Justin’s favorite bakery: Glaus Bakery.

We also headed back to the Red Iguana for dinner. We had been craving it ever since we first tried it. However, as we drove up to the restaurant, we saw that the line was ridiculously long and wrapped around the building. We remembered that the Red Iguana 2 was right around the corner though, so we went there instead and were seated in about 15 minutes. Thank goodness! We were starving and drooling at the thought of a second round of mole. We got more of the Red Pipian mole (our favorite) along with an additional mole, the Mole Verde. Yum!!!

Last time we were at Silver Lake in Big Cottonwood Canyon, we noticed that the boardwalk around the lake merged with some trails leading to other lakes. We didn’t have the energy at the time to explore the other lakes though because we had hiked up to Donut Falls earlier that day. We had been intrigued by the other lakes and decided that today was the day to go back and hike to one of them.

The walk around Silver Lake is extremely easy, so we assumed the trails for the other lakes would be easy as well. There were signs pointing in two different directions: one to the left for Twin Lakes and the other to the right for Solitude Lake. We opted for Twin Lakes. Why see one lake when you can see two, right? 🙂

The hike was somewhat steep and pretty rocky. We enjoyed the view of Silver Lake below the trail and finally got up to one of the Twin Lakes. We only saw one lake, so we began looking for a second lake since the name “Twin Lakes” suggests two lakes (wouldn’t you think?). However, after wandering around for a while, we gave up. It was disappointing. I think the lakes had merged into a single larger lake though (at least that’s what we told ourselves…haha!).

After the hike, we made our way back into Salt Lake City and treated ourselves to Greek food for dinner at Yanni’s Greek Express. It was the best gyro sandwich I’ve ever had! I’m part Greek and have had my fair share of gyros, so that’s saying a lot! The rice was also super tasty. Mmmm…I just drooled thinking about that meal! 🙂

We were supposed to leave Utah yesterday to head to Las Vegas for the 4th of July weekend, but we decided that it probably wasn’t the best idea to stay in Vegas longer than a day during the summer. Since having a travel trailer, we’ve learned a lot about them. One of the important things we figured out was that the air conditioners for RV’s can only cool the units around 15-20 degrees cooler than the outside temperature. Therefore, we realized that if the temperature in Vegas was 110° F, the inside temperature of the trailer could only get down to 95° F (90° F at the coolest).

That seemed pretty miserable to us, so we ended up extending our stay in Utah for one more day and cutting our stay in Vegas down to just one night to ensure that we would be in Vegas for the 4th of July. We didn’t want to have another fiasco similar to Denver by running into no availability at the next campground since it’s a big holiday. Most places were booked on the 4th, but Vegas was wide open.  We realized that must have something to do with the fact that it’s just too darn hot in the summer, leaving lots of openings there unlike most other places in the summertime.

With one last day to spend in Utah, we decided to visit Salt Lake City again for the final time. We grabbed lunch at Cannella’s in downtown SLC for some seriously good salad and turkey tettrazini. Justin remembered the restaurant (and the turkey tettrazini specifically) from years ago when he worked downtown. I’m glad he introduced me to it.

However, I’m not glad he introduced me to Glaus Bakery though because I got hooked on their rum balls! I was craving the decadent chocolate morsels for days, but they kept selling out of them before I could get any. Luckily though, Justin called the bakery this morning and reserved the last 6 rum balls for me. Bless him! I would have shed a tear if I hadn’t been able to have any more of Glaus’ rum balls before leaving Salt Lake.