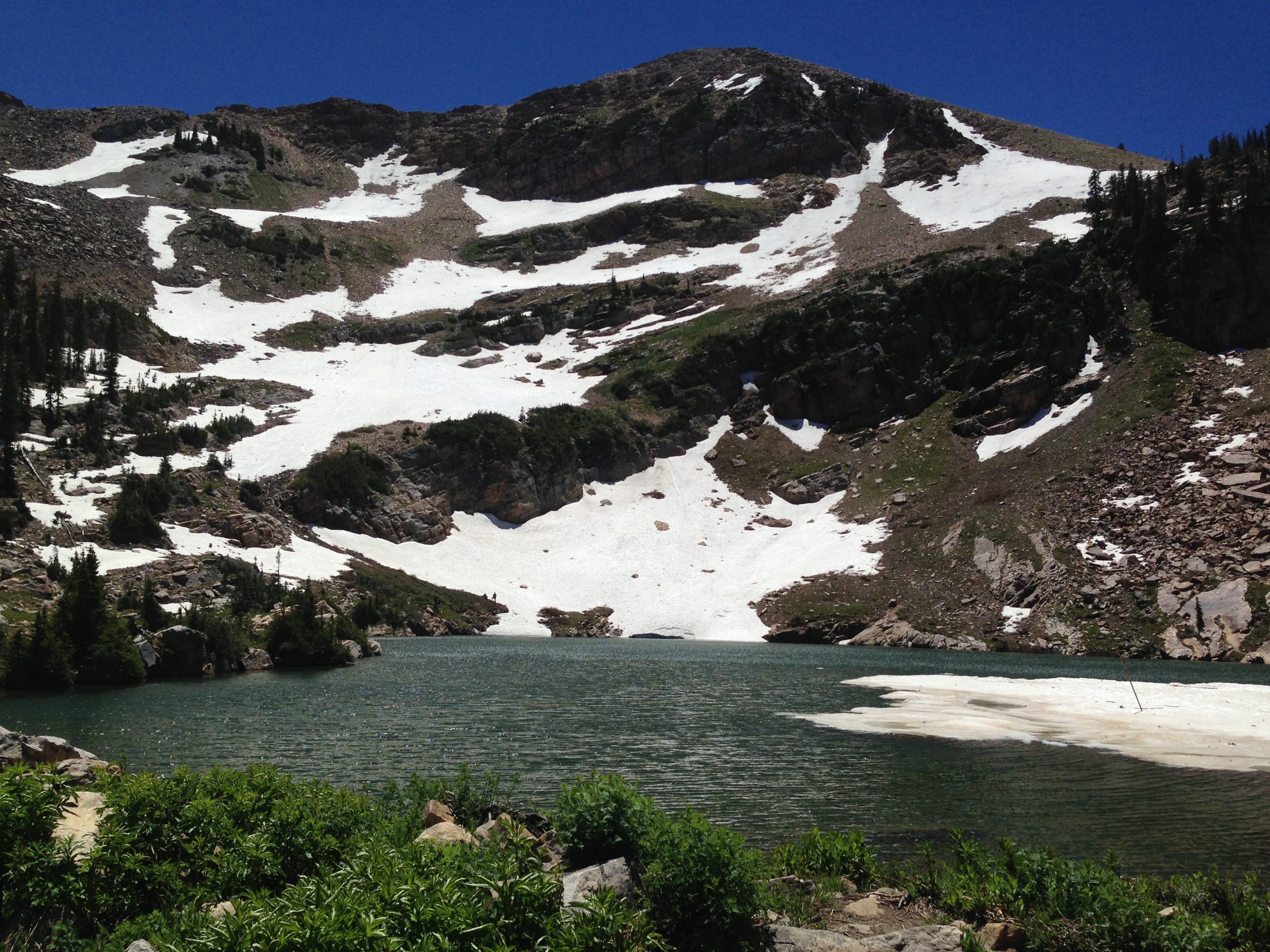 We had to pack everything up and move campsites earlier this morning because the pull-through site we had reserved for the first week at the campground wasn’t available for the second week we extended our stay for.  Therefore, we had to change locations and transplant ourselves to a new back-in site.  It was Justin’s first time backing the trailer into a spot.  He’s been nervous about having to back in rather than being able to pull through, but he knew it would have to happen at some point.  I have to say though, I was impressed with how well he did!

After we got set up at the new location, we headed out towards the Duchesne River. On our way, we passed Strawberry Reservoir.  It had rained the night before, which made for a gorgeous scene with the cloud-filled sky juxtaposing the fresh, green land surrounding the lake.

One of Justin’s fondest childhood memories was staying at a cabin on the Duchesne and going fishing there with his dad and grandpa.  He’s been telling me for years about their fishing cabin and finally had the chance to show it to me in person today.  The cabin is located in Hanna, UT right on the Duchesne River. Other than the river though, there’s not much to the town. There are a couple of cafes (literally a couple as I only saw two) and a general store that also serves as a gas station with two stand-alone pumps in front of the store.

From the main street, we turned left onto a dirt road, crossed a narrow wood bridge, and pulled up to the cabin. Like the town, there wasn’t much to the one-room cabin either, which was really more of a shack with a wood-burning stove and no bathroom. Seeing it for the first time in roughly 15 years brought back a flood of cherished memories for Justin. He showed me the outhouse they used behind the cabin, the field in the back that he used to sneak into by maneuvering through the barbed wire fence and the best fishing spots along the river. It was really neat to finally put a physical place to all the stories I had heard from Justin about the river and his family’s cabin.

The drives to and from the river were both stunning. We ended up taking a different way back than the way we had taken to get to the cabin.  The new route took us through the Uinta National Forest, making for another incredibly scenic drive. We pulled over at one point and were treated to a gorgeous view!

Today was uneventful yet somewhat productive. We stayed at the campground and relaxed in-between loads of laundry. Justin used our bumper grill attached to the back of the trailer to make some hot dogs for lunch. I have a weakness for hot dogs if you haven’t noticed yet.  🙂

getting the rest of our trip supplies out of storage though, so we can use the grill for more than just hot dogs. We currently don’t have any kitchen gear, such as cooking and grilling tools, seasonings, etc.  I can’t wait to have everything, so we can start eating healthier, although I’m sure I’ll still be eating hot dogs now and then. Grills and campfires call for hot dogs!

Since we had already been to Big Cottonwood Canyon, we decided to explore Little Cottonwood Canyon this time. The drive through the canyon was beautiful with visible waterfalls cascading down the sides of the mountains and an active river next to the highway. We were in search of a good hike and wound up at the end of the canyon by the Alta Ski Resort. From there, we began walking up a dirt road.  When it began to switch-back though, we decided to walk through the fields and hiked directly up the steep incline.  The shortcut allowed us to walk alongside a creek.

We eventually met back up with the road, which led us to the Albion Basin Campground and the beginning of the trail for Cecret Lake (aka Secret Lake). The poorly marked trail took us through leftover snow and required us to cross several creeks. Towards the end was a steep, rocky ascent, which led up to the lake.   The remaining snow on the mountain surrounding the lake made for a spectacular backdrop. People say you shouldn’t look back in life, but I like to every once in awhile just to see and appreciate how far I’ve come. This strategy works well for me with hiking. Overall, it was about a 4-mile round-trip hike and took approximately 3 hours.

Afterwards, we were starving and ventured into Salt Lake City looking for a place to eat. However, every restaurant we wanted to go to was closed as it was Sunday, and apparently most businesses aren’t open on Sundays.   This is another reason why I don’t think I could live in Utah. I’m used to Las Vegas (my hometown) where everything is open and available 24 hours a day, 7 days a week (the way I like it). It’s frustrating having to think about what day and time it is in order to figure out if a place will be open.