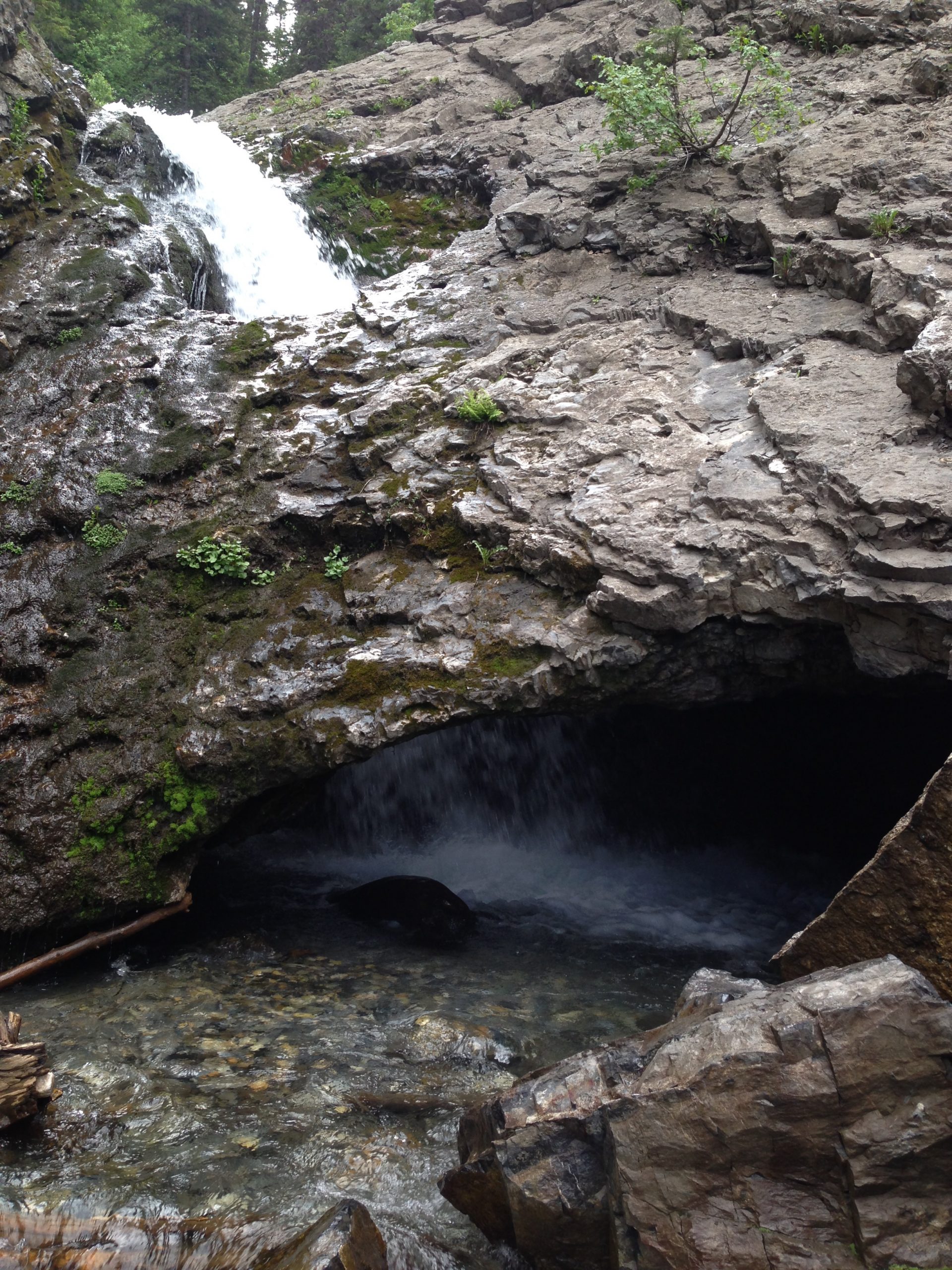 This morning in Big Cottonwood Canyon, we hiked up to Donut Falls, a waterfall that runs through an opening in a rock. Initially the hike was on a pretty level path. The closer you get to the falls though, the more treacherous it gets. Eventually, you have to climb down some rocks and walk alongside the river. Then to get up to the top of the waterfall, you are required to scale more rocks while trudging through the water.

Initially, I wasn’t planning on hiking all the way up to the waterfall, as I knew my feet would be fully immersed in the frigid water. I can’t stand wet, soggy socks and shoes! But as I watched Justin climbing up over the rocks and ascend to a glorious victory at the top of the waterfall, I thought to myself: “What am I doing down here? I’m going to miss out on the view from the top because I don’t want to get wet and have to walk around the rest of the day in squishy socks and shoes? Really?!”

I had an inner struggle between my common sense and my forgotten love of adventure. I could almost make out the angel and devil on my shoulders arguing with one another. I’ve been living cautiously for so long, that I automatically fell into old habits of defaulting on the safe side. I had to consciously think about my ridiculous choice to stay below and then let my adventurous spirit surface from the depths and take control.

While Justin was descending the rocks that lead up to the waterfall, I became determined to make it up to the top myself. As I was wading through the river at the base of the waterfall and climbing over the rocks, I remembered how much I love rock climbing, calculating the best route to take and finding the most stable rocks and reliable grips. Reaching the top of the waterfall was a fun and rewarding challenge. If I hadn’t gone all the way, I wouldn’t have been able to see how Donut Falls got it’s name from the water running through a hole in the rock. Such a unique waterfall!

Sadly though, there were no donuts at the falls. I have a thing for donuts, and the name of the waterfall is deceiving, making one (namely me) think of donuts, hoping there will be a donut reward once I reached the waterfall. As disappointing as it was to not receive any donuts at Donut Falls, I thoroughly enjoyed the hike and the waterfall! 🙂 After we got back to the truck, we continued riving further into Big Cottonwood Canyon to the Brighton Ski Resort and walked around the picturesque Silver Lake nearby.

We then headed into Salt Lake City for lunch where we tried our first Diners, Drive-Ins and Dives restaurant, the Red Iguana! I had never really cared for mole as the only mole I had ever had before was the typical chocolate-flavored type, and I prefer my entrees to be more savory than sweet. As we looked at the menu, we were feeling overwhelmed with all the options. Since we weren’t familiar with the different types of mole listed, we asked the waiter what we should try. Rather than giving us a recommendation though, he brought us out a plate with samples of all the different types of mole available.

Thank goodness we were able to sample the various moles! Being able to taste each of them was extremely helpful. We decided that the Red Pipian was our favorite with the Mole Verde as a close second. The Red Iguana takes mole to a whole new level; actually, it takes mole to skyscraper heights! The complexity of flavors the Red Iguana achieves in their variations of mole are mind-boggling. As I ate my self-made Red Pipian mole burrito with the tortillas they provide, it kept getting better and better, and I found myself moaning in pleasure with each bite. So good!